Andreas is tall in height and tanned-skinned. He has messy pink hair which is shaved at the sides and red eyebrows. He also has blue eyes.

The match against Inazuma Japan during the Football Frontier International started and Andreas received the ball from Hisoka Masoka. Ichihoshi Mitsuru ran towards him and told Andreas that the key players to Nosaka Yuuma's strategy were Kazemaru Ichirouta and Fubuki Shirou. However, before Ichihoshi could finish the advice, Andreas told him to shut up and called him an incompetent fool, passing the ball back to Hisoka. Kazemaru stole the ball and Andreas along with two other teammates targeted him. Thanks to Ichihoshi's mirror, they were able to injure Kazemaru and went for Fubuki next. Since his mirror didn't work, Ichihoshi tackled Fubuki, causing him to stop dodging, and Andreas gave him a kick to his leg, injuring him as well. With the two key players gone, Andreas got the ball and approached Japan's goal but Iwato Takashi stopped him in his tracks with The Wall. After Inazuma Japan broke through Falcon Ali's Dynamic Corona with Penguin The God & Devil, scoring the first goal, Andreas pushed Ichihoshi and called him a failure. As the match progressed, Andreas approached Inazuma Japan's goal and used his technique, Burning Hinotori, but it failed to score a goal since Endou Mamoru caught it with Fuujin Raijin. Later he informed Ichihoshi that now his target was Nosaka Yuuma and he should aim at his head. When Ichihoshi didn't carry out that order, Andreas told him that he lost his last chance. When he noticed the breakup of Ichihoshi, he rushed to him with Hisoka, saying that it was time for them to win this match. However, when he shot once again with Burning Hinotori, he was stopped by Endou's Fuujin Raijin Ghost. When the real identity of Ichihoshi returned, they once again fought for the ball. This time Ichihoshi could easily guess the next step of Andreas, following his characteristic movements. He retrieved the ball effortlessly and continued on towards the goal. In the last few minutes Inazuma Japan scored their second goal, making the final score 2-0. 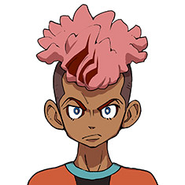 Retrieved from "https://inazuma-eleven.fandom.com/wiki/Andreas_Bebo?oldid=837803"
Community content is available under CC-BY-SA unless otherwise noted.