Asta (アスタ, Asuta) is one of the three main antagonists and the captain and a forward of Destructchers in the Inazuma Eleven GO VS Danball Senki W movie.

He has orange eyes and wears a light blue headband that covers his forehead. He has muscular body. His hair has a wheat brown color. He wears a dark blue jacket with dark blue pants and purple shoes.

Asta first appeared along with San while they're watching the match between Shinsei Inazuma Japan and Inazuma Legend Japan. He later made an appearance at Holy Road Stadium and easily knocked out Endou with a shoot. When Shindou demanded to him tell his name to them, Asta just said that all of them would disappear, so his name wasn't necessary. He later beat every member from Shinsei Inazuma Japan and scored a goal with Dimension Storm.

Later, he and his team, Destructchers play against Shinsei Inazuma Japan. He blocked Hakuryuu's shoot with Asterisk Rock and succeeded. Later he scored two goals using Dimension Storm and a mighty shoot, both breaking through Shinsuke in his Mixi Maxed form. Then he went head to head with Tenma in a battle and he tried to stop God Wind with Asterisk Rock but failed.

In the end he was seen helping Tenma in using God Hand W to stop Fran's Chaos Meteor.

In order to recruit Asta, the following requirements are:

After this, he can be scouted with an amount of 4000 Kizuna points. Be aware that, in order to make him appear as a scoutable option, three other members from Destructchers have to be recruited first.

In order to recruit Asta, the following requirements are needed:

After this, he can be scouted. Be aware that, in order to make him appear as a scoutable option, 5 other members from Destructchers have to be recruited first. 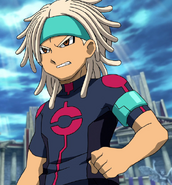 Retrieved from "https://inazuma-eleven.fandom.com/wiki/Asta?oldid=825520"
Community content is available under CC-BY-SA unless otherwise noted.