Baek has red hair that has black at the end of two longest bangs and dark blue eyes with lighter pupils. He has red marks under his eyes and also wears an orange headband with some blue stripes in it. His Orion mark is on his right shoulder.

Baek is a competitive but sly and hurtful player. As a Disciple of Orion, he was compelled to harm other players. When Seok Min-Woo, his captain, tells him to stop with such plays, he promptly devises a plan to hurt Seok to get him out of the match.

Baek played as a forward for his team Red Bison who faced Inazuma Japan as their first opponent and he had a talk with the coach, Cha Un-Su before the match started. The match started and Baek tried to steal the ball from Inamori Asuto but Asuto dodged him. The ball later was stolen back by Seok Min-Woo and Baek received the ball but before he was able to get near the goal, Fubuki Shirou used Ice Ground to stop him. Along with Seok and Lee Dong-Hyeok, the trio used Tokkou Buffalo Train and Baek approached the goal and used Red Break but the technique was stopped by Kazemaru Ichirouta's Spinning Fence, surprised that his technique was stopped. Receiving an order from their coach, Red Bison started to play rough and Baek used Bison Horn, which was able to score a goal after Park Ji-Won obstructed Endou Mamoru's view by whipping up sand. The match resumed with Inazuma Japan's kick-off and Asuto was able to avoid Baek's sliding, leaving Baek to wonder how he was able to dodge it. Gouenji Shuuya approached Red Bison's goal, using Last Resort, and Baek was surprised to see that technique, not sure what kind of hissatsu it was. Later, Gouenji advanced through the field again but he got injured and while he was being treated, a mirror went back into one of Baek's shoes. Before the first half ended, Baek used Bison Horn once again but this time it was stopped by Endou's Fuujin Raijin. During half time, Baek looked over at Inazuma Japan's bench while he was stating that he will crush them to dust with his own hands.

The second half was about to start but Seok approached Baek before Inazuma Japan's kick-off. Baek saw Kira Hiroto's plays and decided to give an order to Lee and Park to crush Hiroto like they did to Gouenji. Baek taunted Hiroto to him and used the mirror in his shoes to blind Hiroto while the others went to attack Hiroto but he used The Explosion to blow them away. Baek, Seok and Lee used Tokkou Buffalo Train to get in fron of Inazuma Japan's goal and Baek used Red Break. Kazemaru weakened the technique by using his head and Endou managed to stop it by using Fuujin Raijin but Red Bison still scored after Lee picked up the lose ball and scored. Seok approached Baek once again and pulled down his shirt, revealing Baek's Orion mark and confirming that he is a member of Disciple of Orion. Since Seok saw his Orion mark, Baek gave another order to Lee and Park to knock Seok unconscious, causing him to be replaced with Son Min-Soo. In the end, Red Bison lost with a score of 3-2 after Haizaki Ryouhei and Hiroto scored with Penguin The God Devil and while he walked off the field, he was a bit scared as Ichihoshi Mitsuru watched him. He went back to his place and was frustrated that his team lost from Inazuma Japan. Two men then came to his room and grabbed him with one of them saying that his role is over.

Baek being taken away by two men dressed in black. 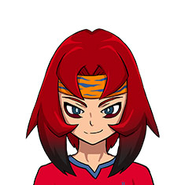 Beak's headshot.
Add a photo to this gallery

Retrieved from "https://inazuma-eleven.fandom.com/wiki/Baek_Shi-Woo?oldid=835644"
Community content is available under CC-BY-SA unless otherwise noted.