This hissatsu is shown for the first time against Epsilon Kai and scored a goal, getting through Desarm's Drill Smasher, his strongest keeper move. Gouenji mastered it with the help of Hijikata when he was taken off by Kira Hitomiko from Raimon. It was first caught by Nero's Procyon Net and later by Sugimori and Kageno Jin's Dual Smash.

It reappeared again in episode 42 as a keshin hissatsu. Kurosaki used this in order to score the second point easily breaking through Sangoku Taichi's Fence of Gaia.

Bakunetsu Storm appeared as an Override technique during the match between Kidokawa Seishuu and Seishou Gakuen. The Mukata triplets used Triangle Z and shot it into the air for Gouenji Shuuya to chain his Fire Tornado with it, creating the powerful Bakunetsu Storm, blowing Haizaki Ryouhei to the back of the goal.

During the match with Zeus, Inamori Asuto used his Shining Bird to chain it with Kozoumaru Sasuke's Fire Tornado to form the Override. It scored the third and winning goal for Inakuni Raimon.

In the final match of Inakuni Raimon against Outei Tsukinomiya, Asuto and Kozoumaru used Bakunetsu Storm again. Nishikage Seiya was going to stop it with Ouke no Tate. Nosaka Yuuma warned him that it is a feint, but the ball was aimed for the ground before him, so Mansaku Yuuichirou picked it up and shoots, because Nishikage couldn't react quickly it went in the goal, scoring the first goal for Inakuni Raimon and tying the score 1-1.

In the original series, user crosses their arms and legs, making a pose as if they were tightening their body. A fiery tornado appears behind the user that disperses, revealing an orange demon. The user then unfolds their arms and legs, kicking the ball into the air when the demon fully appears. The demon place its hands beneath the user and raises them upwards, covering the user in an orange aura, spinning after the ball. The user reaches the ball and spins around once before kicking it. In the anime, the demon's face appears behind the user. In the game, the demon punches the ball at the same time as the user kicks it. The ball heads towards the goal with a spiral of fire following it.

In Inazuma Eleven Ares no Tenbin, there are two variants of Bakunetsu Storm. In the first variation, three users use Triangle Z and sends the ball upwards into the air, leaving a trail of triangles. The fourth user jumps behind Triangle Z and used Fire Tornado but spins after it, leaving a trail of fire and igniting the triangles, lighting them on fire. The user reaches up with the ball and spins around once before kicking it, causing the ball to be lit up in fire. In the second variation, the first user uses Shining Bird and sends it upwards into the air. The second user spins after Shining Bird, leaving a trail of fire. When the second user reaches the ball, they kick it forward, igniting the ball on fire, leaving a spiral of fire following it.

The user summons a keshin in place of the orange demon. The user crosses their arms and legs and unfolds them. The keshin place its hands beneath the user and raises them upwards, causing the user to be covered in an orange aura. The user spins around once and kicks the ball, with the keshin behind the user. The ball travels forward with a spiral of fire following it. In the manga, the keshin punches the ball as the user kicks it.

Bakunetsu Storm in the Galaxy game. 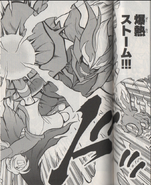