Bernard has pale skin, blue eyes and long white hair tied into a ponytail. He has a mole below his left eye. He wears an indigo suit, a white shirt and a purple tie.

Bernard appeared unexpectedly in Orion Foundation's headquarters after a long absence. As it turned out during this time the duties of the Orion's chairman were carried out by his trusted butler Gustav Nikolsky. However, when Bernard returned, he expressed deep dissatisfaction and disappointment with the way Gustav was managing Orion. Bernard found here only chaos and confusion. When Gustav was trying to explain everything, Bernard interrupted him and admitted that in some part he was also guilty for all this because he wasn't here in a crucial time. He also trusted Gustav too much, allowing him to act in an area he had no idea about. Bernard advised Gustav to go on a long vacation now and the butler silently left the chairman's office. Soon after Shinjou Takuma appeared and Bernard greeted him coldly, stating that apparently Japan and Zhao Jinyun caused him trouble recently. Bernard expected that it would be the last difficulties that occurred. Shinjou left on his desk a dossier with informations about the Disciple of Orion and when he was going to leave, Bernard suddenly asked him to stay. He stated that Shinjou worked for many years at his father's side as a chairman's adviser and supported his ideas. Even now he was faithful to them despite the fact that the previous chairman was dead. As it turned out Bernard had completely different visions about the future of Orion. He intended to use it to take control of the world's economy. What's more Bernard was going to remove anyone who would stand in his way to carry out these plans, even if it would be Shinjou himself. As a guarantee that Shinjou wouldn't betray him, Bernard considered making his son disciple as well. According to his words, those who opposed Orion would be washed away and disappear.

Bernard appeared later in Vladimir's flashback while he was making a speech to the other Orion's members. As he explained he was planning to offer help to all poor countries of the world. Therefore, they should develop the soccer business and associated entertainment business as quickly as possible. Bernard decided that through these actions he would save the world and he was going to do everything necessary to achieve it. According to his words, if they would follow the same path as his father did, their help for the world would be delayed by 20 years. His mission was to change the Orion using his own methods and he intended to change the whole world.

Some time later it was seen that Bernard called to Zhao and informed him that Inamori Asuto became a Disciple of Orion, what's more according to his words, it was his own decision. When he later passed Shinjou in the corridor in Orion's headquarters, he revealed to him that Asuto joined Orion. Shinjou faced the fact without a trace of any emotion. Before the match with Japan, Bernard met with Froy Girikanan who turned out to be his younger brother. Bernard told him to use now Orion's power however Froy refused it, stating that they prepared well for the upcoming match and wouldn't fail. It was revealed that Perfect Spark lost on purpose against America, just as Bernard wished and now Froy was going to do everything on his own. Bernard was seen later watching the match against Japan. As he stated, he wanted to see on his own eyes the real power of Russian team. When Perfect Spark initiated later their tactic Aurora Wave it turned out that they used tear gas against the opponent. Cold as usual, Bernard explained that it was time for Froy to understand who was really in charge of the team. Froy disagreed to his methods and left the field along with Viktor Sedov. Bernard didn't seem to care about it at all and let Asuto to prepare for the match and destroy Japan. When As Inam entered the field along with Malik Kuabel, Bernard smiled, delighted with his ingenious plan to destroy Inazuma Japan. And indeed Japan's players were completely distracted and couldn't focus on the game, trying to save Asuto from Orion. When Nosaka Yuuma and Ichihoshi Hikaru got the ball, Bernard sent to Russian players new order to take the duo down. Soon they used against Ichihoshi oil, arrows and paralysed Nosaka with their bands. The match resumed when Kozoumaru Sasuke injured As Inam and Bernard stated that Russia's mission was to win with an overwhelming score difference, to eliminate Japan from the tournament. When Japan managed to tie 2-2, Bernard got irritated. He left the stadium, stating that Perfect Spark should use any means necessary to win. The match ended with Russian winning, after they scored the third goal, using Aurora Wave and sleeping gas against Inazuma Japan.

Bernard celebrating on his birthday. 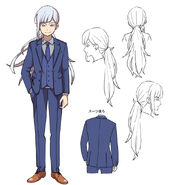 Young Bernard's concept artwork.
Add a photo to this gallery

Retrieved from "https://inazuma-eleven.fandom.com/wiki/Bernard_Girikanan?oldid=817848"
Community content is available under CC-BY-SA unless otherwise noted.