This article is about the Big Waves of the Inazuma Eleven GO series, for the original Big Waves team, visit Big Waves.

Big Waves is known to always win with a wide point margin, so they would be a team with outstanding offense. However, during the match, Big Waves acted more defensively because of using hissatsu tactics Suck Out to stop many players from Inazuma Japan, which shocked the Japanese team.

In the game, they can be challenged again at the space alien's route in Sazanaara, as the second team in the right route. All members are at level 23.

Big Waves' uniform consists of a yellow shirt with green sleeves and green thunderbolt-like lines that start from the collar, coupled green shorts and yellow socks. The goalkeeper uniform is similar to the Big Waves' one from the original series, but the purple and white stripes are thunderbolt-shaped. The captain armband is red.

They first appeared in episode 6, playing against Inazuma Japan in their second match of the Football Frontier International Vision 2. Tsurugi scored the first goal by using his new hissatsu, Bicycle Sword. However, the episode ended with the score of 2-1 to Big Waves since the captain, Cole LaRuze, scored two goals using Megalodon.

As the match continued in episode 7, Cole LaRuze and Octa Pasun tried to score again with Megalodon. However, Ibuki Munemasa stopped both shoots hissatsu with Wild Dunk. As Inazuma Japan started advancing, Big Waves tried to stop them. However, Inazuma Japan tied the score 2-2 because of Matatagi Hayato's Parkour Attack. After, Big Waves kept using Suck Out on some of Inazuma Japan's players. However, it was broken through after Nozaki Sakura found a way out by having Shindou Takuto use Kami no Takuto FI. Jude also failed to catch Manabe Jinichirou's accidental shoot. At the end of the match, they lost with a score of 2-3. After their loss, strange veins could be seen pulsing on Cole LaRuze's arms. 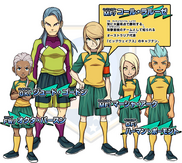 Big Waves after losing the match. 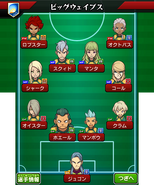 Big Waves' formation in the game.
Add a photo to this gallery