Episode 018 (Galaxy)
Bitway Ozrock (ビットウェイ・オズロック, Bittowei Ozurokku) is an alien and a member of the Ginga Renpou Hyougikai. He's a forward, defender and the captain of Ixal Fleet, as well as being the main antagonist in the Inazuma Eleven GO Galaxy series.

Ozrock has pale skin and slanted, green eyes. He has teal-colored hair with two long strands that point out from both sides of his hair. He also wears a dark blue, dark brown and white jumpsuit.

200 years prior to the start of the series, Ixal, Ozrock's home planet, was destroyed by Faram Obius. Only 184 people escaped from their planet by a cold sleep device, with Ozrock being one of them. 200 years later, only eleven escapees awakened from their cold sleep states while the rest didn't. Ozrock and the other ten escapees formed Ixal Fleet to take revenge on Faram Obius and conquer the galaxy.

Ozrock is currently a member of Ginga Renpou Hyougikai. He came to Earth three months prior to the start of the series and talked to Gouenji Shuuya about Grand Celesta Galaxy. At first, Gouenji didn't believe him and thought that he was joking. To prove that he was serious, he shot a soccer ball that sealed the moon and said that if Earth didn't participate, he would seal Earth away with his power.

He first appeared in episode 18 in the Holy Road Stadium after Inazuma Japan won against Storm Wolf. He put the audience to sleep and "collected" the aliens that impersonated Storm Wolf.

Then, he and Gouenji told Inazuma Japan the truth about the FFIV2 and the main soccer tournament, the Grand Celesta Galaxy. He also warned Inazuma Japan (Earth Eleven) that they needed to participate in order to protect Earth from being conquered by Faram Obius. After the conversation ended, he left.

He appeared again in episode 20 as a hologram to inform Earth Eleven about the planet they will be arriving at to fight their first opponent, Sandorius.

In episode 22, he smiled amusingly while watching the match between Earth Eleven and Sandorius Eleven.

During the match between Sandorius Eleven and Earth Eleven in episode 23, Minel Eiba contacted him. He told him to bring Tsurugi Kyousuke to Faram Obius by the order of Lalaya Obies, and Ozrock accepted. Later, Ishigashi reported to him that the mission was completed and Matsukaze Tenma obtained the stone of light with the help of Katra Paige, princess of Kiel. Afterwards, he told Ishigashi to send Tsurugi to Faram Obius and use Manuuba Gibutsu (disguising as Tsurugi) to spy on Earth Eleven.

In episode 25, after Manuuba was suspected by some members of Earth Eleven, he warned Manuuba to be careful of Tenma since he knows Tsurugi the most.

In episode 36, he revealed Katra Paige as his prisoner, who then told her whole story to Potomuri. Later, Ozrock appeared on the screens in the Grand Celesta Stadium and both teams' rooms. He then told everyone on Faram Obius that he had already invaded the eight central control centers of Faram Obius, icluding 7 million spaceships for emergency escape. He then explained Ixal's story and his plan based on his revenge. If Faram Dite lost the match, the transportations for escape would self-destruct, but if they won, the transportation would be returned. Using this strategy, Ozrock wanted the people of Faram Obius to feel the terror of the aliens whose planets were destroyed by Faram Obius.

In episode 39, when the life energy gauge was filled, he tried to destroy the whole stadium with the Anti-Cheating Laser. However, it was protected by the life energy produced from Tsurugi and Tenma's clash. After Earth Eleven won the match and the cosmic plasma photon cannon came up from the ground in a complete state, he appeared with his team, Ixal Fleet. He intended to take the cosmic plasma photon cannon without fulfilling his promise with Katra, which was to erase the black hole.

After his team Ixal Fleet was defeated in episode 43, Minel Eiba attempted to have Ozrock and his team executed as S rank criminals. Though Lalaya intervened, stating that Ozrock's crime was canceled out by Faram Obius' invasion of Ixal 200 years ago. She then has them employed as her advisors.

To recruit Ozrock, Ixal Fleet has to be defeated in the story mode first. Also, the following requirements are needed:

After that, he can be recruited.

Ozrock's artwork in the official site. 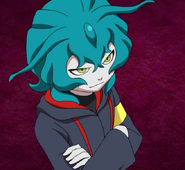 Ozrock in his cold sleep device.

Retrieved from "https://inazuma-eleven.fandom.com/wiki/Bitway_Ozrock?oldid=815418"
Community content is available under CC-BY-SA unless otherwise noted.