At Inazuma Town's riverbed, Tenma, Shindou Takuto, Shinsuke, Sorano Aoi, Yamana Akane and Seto Midori were thinking back at the opponents Raimon has faced so far during the Holy Road tournament and this hissatsu was seen in their flashback.

It appeared in the GO movie and blocked Seidou's Seiei Hei Pawn B from advancing through the field, with Amagi's Viva! Banri no Choujou. It also created a chain shoot with Justice Wing and scored the fourth goal against Zero.

It was used in episode 4 to stop Alpha's keshin armed shoot but without any success. However, with the help from Straw and Smile, it helped Matchos who stopped the shoot using Excellent Breast. 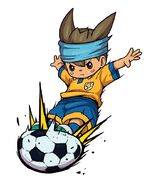 Retrieved from "https://inazuma-eleven.fandom.com/wiki/Buttobi_Jump?oldid=808593"
Community content is available under CC-BY-SA unless otherwise noted.