Chrono Storm (クロノストーム, Kurono Sutōmu) is a team made of the strongest eleven in history as described in the Hasha no Seiten.

Chrono Storm is the name given to the Strongest Eleven in History, which is made of members from Raimon who Mixi Maxed with characters possessing powers described in Master D's Hasha no Seiten. This was done in order to complete Daisuke's dream and to save soccer. During Ragnarok, they played against The Lagoon, Feida's final and strongest team.

The match continued in episode 49. Saru Mixi-trans, uses Chou Majin Evarth Armed, and scores with Shellbit Burst. Chrono Storm counterattacked with its new tactic, which resulted in Tenma scoring a goal with Keshin armed God Wind, and Fei scored another with Ouja no Kiba Kai, making the score 4-3.

In episode 50, Chrono Storm finally unlocked their strongest hissatsu, Saikyou Eleven Hadou, and scored two times with it. This made Chrono Storm win the match with a score of 5-4.

Chrono Storm uses Raimon's uniform with the goalkeeper having a black shirt with a yellow collar. The sleeve is black with a white stripe on the top, and a yellow patch on the bottom. The goalkeeper also has white gloves. The shorts are black, and the socks are yellow. The captain's armband is red. 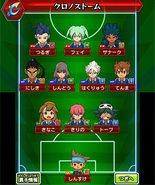 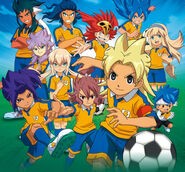 Chrono Storm on the promotional poster

Chrono Storm on the DVD cover

Retrieved from "https://inazuma-eleven.fandom.com/wiki/Chrono_Storm?oldid=827660"
Community content is available under CC-BY-SA unless otherwise noted.