Dost has a fairly light skin tone and is tall in height. He has long, dark purple hair with a white stripe in the middle. His back hair is worn in a high ponytail and his two long bangs are tied with golden ringlets. He has medium-sized eyebrows of the same color. He has yellowish-green eyes and rosy, square-shaped marks on his cheeks. He has the orion mark tattooed on the palm of his left hand.

Eternal Dancers faced Inazuma Japan in the Football Frontier International. The match started and Dost quickly scored the first goal with Requiem Dust since Japan's goalkeeper, Nishikage Seiya, didn't see that the technique went to the other side of the goal. He went to Nishikage and stated that he wouldn't be able to stop the technique even if it went towards him. He later used Requiem Dust again before the first half ended, easily passing through Inazuma Japan's players, and it broke through Nishikage's Ouke no Tate, scoring the second goal for Eternal Dancers. The second half started and Inazuma played much better after Nosaka Yuuma became the captain for them but Dost managed to get the ball and used Requiem Dust once again. However, it was stopped this time by Nishikage who used his new technique, Artemis Ring. He later got injured by Inazuma Japan's tactic, Grid Omega version 2.0, which resulted in Nosaka easily scoring a goal for his team since all the players of Eternal Dancers were lying on the field. In the end, Eternal Dancers lost with a score of 4-2 and Dost talked with Onakhon Ims, showing his orion mark as well on his hand. 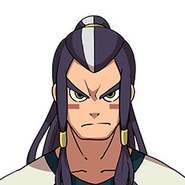 Retrieved from "https://inazuma-eleven.fandom.com/wiki/Dost_Gales?oldid=829633"
Community content is available under CC-BY-SA unless otherwise noted.