Dragonlink (ドラゴンリンク, Doragonrinku) is a team which appeared in the second half of the finals of the Holy Road against Raimon in the Amano Mikado Stadium.

Dragonlink was originally a project created by Senguuji Daigo, the creator of the Fifth Sector and the old Holy Emperor. The project was discovered by Hiroto and Midorikawa in episode 40, though they didn't know what it could be.

Dragonlink finally made its appearance in episode 42. They get switched with Seidouzan and played the second half against Raimon. It was also said by Senguuji Daigo this team is Fifth Sector's strongest team. Raimon was immediately surprised due to the fact that had 4 forwards of the team used their Keshin.

In episode 43, Raimon was surprised again to see all Dragonlink's members were keshin users, and not only the forwards and the goalkeeper, Senguuji Yamato.

In episode 44, Senguuji Daigo told Gouenji that all Dragonlink's members couldn't play soccer during their childhood, but thanks to Fifth Sector they gained a lot of talent and discovered how to bring out a Keshin. He also said that they are Fifth Sector's symbol. Later, most of Dragonlink's keshin were beaten by simples hissatsu used by Raimon, like Soyokaze Step and Denrai Houtou. At the end, they lost 5-4, but Senguuji Daigo and the players of the team understood what real soccer is.

Dragonlink's jersey is gray with white, gray-edged sleeves and have no emblem on the front. The shorts and socks are white, and the captain's armband is red. The goalkeeper wears a cyan and black shirt with blue shorts and gray socks. His gloves and cleats are blue as well.

Dragonlink's formation in the anime. 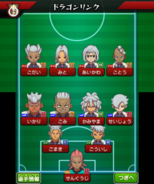 Dragonlink's formation in Inazuma Eleven GO Galaxy.
Add a photo to this gallery

Retrieved from "https://inazuma-eleven.fandom.com/wiki/Dragonlink?oldid=819090"
Community content is available under CC-BY-SA unless otherwise noted.