Dylan Keith (ディラン・キース, Diran Kīsu) is a forward for Unicorn. As the ace striker of the team, he is nicknamed "Mister Goal".

In the alternate timeline of Inazuma Eleven Orion no Kokuin he is a forward for Star Unicorn.

Dylan has darkish blond hair that he keeps tied in a little ponytail. He wears a pair of light blue glasses that hides his eyes. He is usually seen wearing the Unicorn uniform and jacket. He is referred by Rika along with others as a "total hottie".

He is very easygoing and positive. In the games he acts in a very friendly manner, especially towards Endou, going as far as tackling him on their first meeting. He often uses English words when speaking (especially "you" and "me") and has the habit of saying "gin gin!" when he's happy or excited about something. He has never been seen without Mark Kruger, relating to their close friendship.

Dylan and Mark in the match with Inazuma Japan. He was first seen on episode 68 with Mark, telling him that 'they' will come back for FFI, which refers to Domon and Ichinose and becomes excited.

He reappears in episode 85 during the FFI opening along with the other Unicorn team members. He appears again in episode 86, where he was seen checking on Endou because they were curious to see if Endou was truly what Ichinose had said about him. As Inazuma Japan's goalkeeper doesn't know him and Mark, he says to Fideo to introduce them. Later during the FFI with the rest of Unicorn, Dylan fought against Inazuma Japan and scored two goals with Unicorn Boost and Gran Fenrir. Eventually, after putting up a good match they lost.

Later, they had a match against The Empire but lost due to not having Ichinose thus they were unable to break through Teres's Iron Wall. He was seen along with Mark, Fideo, Teres, and Edgar, helping Inazuma Japan in rescuing Haruna and Rika, who had both gotten kidnapped in episode 108, Haruna by Makai Gundan Z and Rika by Tenkuu no Shito. He was seen watching the match between Inazuma Japan and Little Gigant.

He only appeared in Gouenji's flashback in episode 37 during Gouenji's conversation with Toramaru about Amemiya.

Dylan Keith appeared in episode 22 when American team Star Unicorn arrived to Russia for the FFI tournament. At the airport they met with Inazuma Japan and Spanish team Muteki no Giant. Later everyone were welcomed by the captain of the Russian team, Froy Girikanan who revealed that they all were against the Orion Foundation.

It was revealed that Star Unicorn won with Russia 2-1. When Inazuma Japan's members visited them in their campground, Dylan and Mark Kruger offered a small game for fun and testing their skills. Pampietta Scoglio announced that hissatsu techniques were not allowed and American coach Mack Scride whistled for the kick-off. Finally it was Japan who won after Endou Mamoru scored a goal. Later some helicopters flew and Mack was unexpectedly arrested by strange people dressed in military uniforms. Their commander Bahat Descom explained that in order to keep their representative seat, Star Unicorn had to participate in the match with Navy Invader. Although the team accepted the challenge, the match turned out to be fatal for America. Ichinose Kazuya‘s shot was easily blocked by deadly technique Gunji Eisei Phobos and Michele Jacks got injured after being hit by a laser. At the beginning Dylan was very excited about the idea of the match with Navy Invader. However after Michele was wounded, Dylan’s enthusiasm dropped, leaving only the anger and desire of revenge for his teammate’s harm. Later when Navy Invader’s deadly tactic Jiraigen threw the players with enormous strength, Dylan was pushed away and his goggles broke into pieces. Finally Star Unicorn lost because they weren’t even able to move and oppose the crushing strength of the opponent.

First you must defeat Unicorn on the Hirai Shinzou's taisen route. Then select him in the machine to recruit him. Go to Kujaku Island and follow the route to the football stadium. He appears randomly. You have to battle him 3 times.

In order to recruit Dylan, the following requirements are needed:

In order to recruit Dylan, the following requirements are needed:

After this, he can be scouted for an amount of 2210 Kizuna points.

In order to recruit Dylan, his QR code needs to be scanned first. Also, the following requirements are needed:

Dylan and Mark in the match against Inazuma Japan.

Dylan in his Star Unicorn jacket. 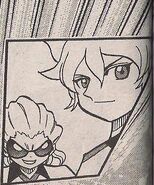 Dylan and Mark in the manga.

Dylan in the TCG.

Dylan in the TCG.

Retrieved from "https://inazuma-eleven.fandom.com/wiki/Dylan_Keith?oldid=834184"
Community content is available under CC-BY-SA unless otherwise noted.