Eisei Gakuen () is a team in Inazuma Eleven Ares no Tenbin consisting of the children from the Ohisama En orphanage.

This is the first appearance of this team in the Football Frontier. Formed by the orphans from Ohisama En (except for Kira Hiroto), they have a strong, very offensive team with some quality forwards notably Kiyama Tatsuya, the prince among the players and Kira Hiroto, the top goalscorer of all the teams of the Football Frontier after the qualifications. But, this hides the fact that Kira plays lonely (he even steals the ball from his own teammates) and choose when he trains and plays. This caused some anger in the team and difficulties for the coach Kira Hitomiko and Tatsuya because after all, they are all united by the dream of winning the Football Frontier and becoming champions. 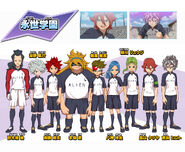 Eisei Gakuen's players in Orion no Kokuin.
Add a photo to this gallery

Retrieved from "https://inazuma-eleven.fandom.com/wiki/Eisei_Gakuen?oldid=844167"
Community content is available under CC-BY-SA unless otherwise noted.