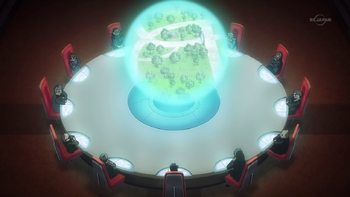 El Dorado (エルドラド, Eru Dorado) is the supposed antagonist organization in the Inazuma Eleven GO Chrono Stone series, until Feida turned out to be the real antagonist. Their headquarters, Saint Elda, is located in the Future City.

They first appeared at the end of episode 47, watching the interview of Endou Mamoru.

They appeared in the first episode of Chrono Stone.

In episode 3, their leader Toudou Heikichi told Alpha that he was disappointed of his 2-0 defeat against Tenmas and that he acted weakly with Protocol Omega.

In episode 10, as Toudou was about to send Einamu and the others to the MUGEN Prison, Beta asked him to give them one more chance.

In episode 17, Toudou was seen holding a purple Chrono Stone, in which Endou Mamoru was imprisoned in. He was wondering if he could use it to increase power of Protocol Omega since is also happened with Endou Daisuke's one and Raimon.

In episode 18, Toudou and the other commanders were talking about Nanobana Kinako, Raimon's ace striker who suddenly appeared in the timeline because of a time paradox. Later, Gamma appeared, taking Beta's place as the captain and replacing Dorimu, Gaura, Neira and Zanou with Rujiku, Galling, Dhanna and Bahamusu to create Protocol Omega 3.0. Later, Zanark Avalonic started talking to Toudou and the others commanders through the Route Craft's camera about a deal.

In episode 21, when Protocol Omega 3.0 was defeated, Zanark sent them away to an unknown place, in which one of the members of El Dorado said he treated them like toys. Toudou answered that Zanark is someone who doesn't hear insolence. However, he continued by saying it could be the time to use "him", and finished by saying he was impatient to see what reaction "he" would have.

In episode 32, El Dorado's commanders received the information concerning Torb. He was accidentally sent to the Cretaceous Era by a time machine. He could learn how to speak with a module installed in it. However, Torb thought that the dinosaurs were his parents and thus thought that Tochan was his father.

In episode 34, El Dorado's headquarters were under attack by SARU and the Second Stage Children.

In episode 39, Raimon was teleported to El Dorado's headquarters. Toudou and Sakamaki appeared and started talking to them. They explained their true intentions to Raimon and told them about the Second Stage Children's actions and the Ragnarok Tournament. After that, they asked Raimon if they would join forces with them and after some thinking, Raimon decided to join.

The MUGEN Prison (ムゲン牢獄) (dub: CONTRA Facility), whose initials mean "Must-Generic Training Center" ("Confinement Training Facility" in the dub), is a location where Protocol Omega's teams were sent since they weren't strong enough against Raimon. As the name suggests, they're training hard there to level up. Zanark was sent to the MUGEN Prison too as a S-Rank criminal, but he escaped in episode 18 and become the first person to ever escape from it.

Retrieved from "https://inazuma-eleven.fandom.com/wiki/El_Dorado?oldid=794456"
Community content is available under CC-BY-SA unless otherwise noted.