All members wear the away uniform of Raimon (GO).

El Dorado Team 01 first appeared in episode 39, led by Kidou Yuuto. As he said Tsurugi would be the captain, he was shocked.

They played against Zan at the Ragnarok Stadium. El Dorado Team 01 is then later overwhelmed by the rough plays of Zan, even injuring Tsurugi. In the end, they lost 5-1. The fourth goal that made Zan in the lead was Fei Rune's own goal while Nanobana Kinako in Keshin Armed shot the only point for the team.

Tsurugi's reaction when Kidou said he would be the captain. 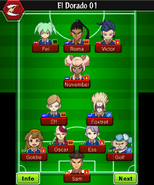 El Dorado Team 01's formation in the Chrono Stone game.
Add a photo to this gallery

Retrieved from "https://inazuma-eleven.fandom.com/wiki/El_Dorado_Team_01?oldid=847709"
Community content is available under CC-BY-SA unless otherwise noted.