El Dorado Team 02 appeared in episode 39, led by Sakamaki Togurou. He said the captain would be Shindou, which shocked him and the Protocol Omega's captains; Alpha, Beta and Gamma. Later, they were practicing but they didn't work together and Amagi was seen to be angry at the Protocol Omega captains for not listening to Shindou's orders.

They played against Giru at the Ragnarok Stadium. In the end, they won with the score 4-3 due to Alpha, Beta and Gamma's combination shoot, Omega Attack, Shindou Takuto's Setsuna Boost, Beta's Keshin shoot, Athena Assault and Zanark's ferocious shoot.

Protocol Omega's reactions when Sakamaki said Shindou would be the captain. 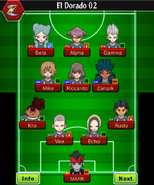 Tensions between Protocol Omega's players.
Add a photo to this gallery

Retrieved from "https://inazuma-eleven.fandom.com/wiki/El_Dorado_Team_02?oldid=847712"
Community content is available under CC-BY-SA unless otherwise noted.