Episode 068
Inazuma Eleven GO the Movie: The Ultimate Bonds Gryphon (flashback)
Episode 010 (Chrono Stone)
Endou Daisuke ( ) was Endou Mamoru's grandfather and the original Inazuma Eleven's coach. When he was hiding his identity, he went under the alias Araya Daisuke (アラヤ・ダイスケ). He was also the coach of Little Gigant and a temporary coach for Raimon (Chrono Stone).

He has a grey beard and typically hides his identity with his sunglasses, although his eyes were shown to be black. He was shown to have similar appearances with his grandson, Endou Mamoru.

He was kind and a warmhearted person. He cared about his grandson, his whole family and his team too. Even though at times he could get angry, especially when Garshield attacked Little Gigant. When Daisuke was young, his personality was just like Endou, energetic, headstrong and loves soccer from the bottom of his heart.

He was known for being one of the best soccer players, his grandson Mamoru idolized him. During this time it was said that he was dead but that before he died he was a great person, goalkeeper and coach.

It was said that he could have died because of Kageyama. Mamoru managed to win the Football Frontier by using his techniques. He was good friends with the Principle of Yokato Junior High, often training with him and such, he also trusted him with one of Daisuke's notebooks, containing Seigi no Tekken, Mugen The Hand, and The Earth and other unnamed hissatsu, telling his old friend as stated, to burn the book away.

In the FFI, Natsumi said to Endou that his grandfather might be on the Liocott Island, which made Endou happy. He was always seen in a truck and driving around or with Rococo.He was always watching Endou's progress in the nationals, he always looked out. He was referred by Endou as the old man with a tire truck because he still didn't know that he is his grandfather. His cover was blown first by Natsumi, and then he revealed himself to Onigawara Gengorou (whom he apparently had known for a long time). He stated that he wanted to face the strongest team. He also seemed to be enjoying the final match.

In episode 123, it was revealed in a flashback that he told to Little Gigant's members that they would need to score the first goal in order to win. As Maxi and Saito says that they can win even if they took the first goal as long they have Rococo in the match, Daisuke criticized them, saying that they have a long way to make. When the match ended, he said something to Rococo and the others about how they feel when they play soccer. At the end he said goodbye to Endou and Hibiki as he stated that he had some other plans to do.

In episode 126, he called Endou's mother saying that he had made a new team in the country of Paradranca.

In the movie, he appeared in Endou's flashback where he was seen in the hospital talking to Endou about him becoming a coach.

Raimon first had a problem in trying to read the Hasha no Seiten, especially when they cannot see Daisuke anymore because he was dead, but Fei suggested they could time travel to the time where he was still alive.

Daisuke appeared in episode 10. He talked to Kidou Yuuto and Sorano Aoi. At the end of the episode, he said to Raimon that he will be their coach for the match opposing them against Protocol Omega 2.0.

In episode 11, he transformed into the Chrono Stone. After that, he explained what was written in the Hasha no Seiten.

In episode 19, after the Mixi Max between Jeanne and Kinako failed, he explains that her power hasn't awakened already. Shindou asks him if is the opposite of Nobunaga's case, and he replied yes.

In episode 21, he said that the second player that was discripted in Hasha no Seiten was actually Kirino after he saw his skills when Mixi Maxed with Jeanne d'Arc.

In episode 35, he explained about King Arthur. He also has a flashback of telling the story of the Round Table Knights to some kids. Afterwards, he was shocked that Nanobana Kinako found an artifact leading to King Arthur easily.

At the end of the Ragnarok tournament, and everything restored and reconciled with, he turned back to normal and slowly disappeared, returning to his rightful time.

In order to recruit Daisuke, the following requirements are needed:

Endou Daisuke as goalkeeper with the Japan Nationals.

Daisuke as the coach for Inazuma Eleven.

Daisuke when he was training young Rococo. 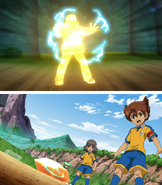 Daisuke transforming into the Chrono Stone.

Daisuke returning to his time.

One of Endou Daisuke's notebooks.

Daisuke reuniting with Mamoru in the game.

Daisuke and Tougo
Add a photo to this gallery

Retrieved from "https://inazuma-eleven.fandom.com/wiki/Endou_Daisuke?oldid=849372"
Community content is available under CC-BY-SA unless otherwise noted.