It first appeared in episode 86, used by Edgar in a match to see if Endou could stop his shoot. It is the first hissatsu to break through Ikari no Tettsui.

In episode 87, it appeared again during the match between Knights of Queen and Inazuma Japan. It was blocked the first time by Kabeyama's The Mountain and Endou's Ikari no Tettsui. The second time, it broke through The Mountain and Ikari no Tettsui, scoring the first goal for Knights of Queen. Edgar shot it a third time, all the way from the opposite goal, but it wasn't shown until episode 88 what happened after, as the episode ended.

In episode 88, the maximum Excalibur was stopped by The Mountain and Ikari no Tettsui, but Kabeyama got injured by the shot, so he had to be switched out. Edgar used it again to block Dragon Slayer and shot it directly at Inazuma Japan's goal, where it was blocked by Kogure's Senpuujin and Endou's new hissatsu technique Ijigen The Hand.

It was later used in episode 108 again. It was used by Edgar when he visited Inazuma Japan for a match. It was blocked however by Ijigen The Hand 改.

In episode 109, it was used twice in the match against Tenkuu no Shito. The first time, it was blocked by Enolel's Holy Zone. The second time, Edgar used it to shoot Sein's Heaven Drive back to the goal, absorbing its power. It broke through Holy Zone, scoring the second goal for the Red Team.

The user spins their hands and jumps toward the ball. They lift their leg, creating a long sword with yellow bands circulating around it. The person pauses for a moment for the sword to extend fully. Once the sword is fully visible, the user smashes the ball toward the ground. The ball races toward the goal, scraping a large amount of dirt of the ground.

Excalibur 改 in the game.

Excalibur in the TCG. 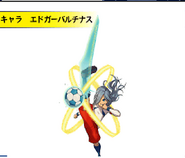