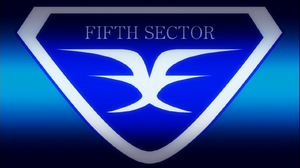 Fifth Sector (フィフスセクター, Fifusu Sekutā) was an organization that managed all soccer matches and teams in Japan in the Inazuma Eleven GO series.

It was explained by Otonashi Haruna that Fifth Sector decides the scores in each game/match and notifies each school via a score order whether they win or lose. Apparently, it was to 'protect order'. It was stated that each school's ranking or merit is decided by how strong each team is in soccer. It was to balance each and every team in Japan. In other terms, most games were fixed because of what Fifth Sector has done.

They were mostly looked upon as the antagonist, since they fixed and controlled each score in each game/match made. Their leader or Holy Emperor, was Ishido Shuuji, later revealed to be actually Gouenji Shuuya. However, Raimon started a revolution against Fifth Sector to return the real soccer, making the diferent teams they fought against revolt too. At the end, they won the Holy Road, which meant Fifth Sector lost to the Resistance. Hibiki became the new Holy Emperor and reverted soccer back to the way it was.

Fifth Sector sent some of their minions/spies to each school, in order to control them easier. Those who they sent were called SEEDs, including Tsurugi Kyousuke from Raimon. It was revealed in the first movie that they trained hard in God Eden before reaching a power strong enough to be sent to different schools.

At the end of the movie, a cliffhanger was shown where Senguuji Daigo and Ishido Shuuji talked with each other about children whose power reached a high stage so high, beyond human limits; the Second Stage Children. Senguuji said some of these children already existed in this era, and that the true goal of Fifth Sector was to find children having a such power, as Helper X ordered them to do. Then, he made Ishido the Holy Emperor, giving him the task to find such children.

These were the matches that Fifth Sector set up:

Arakumo Gakuen VS an unknown team

Retrieved from "https://inazuma-eleven.fandom.com/wiki/Fifth_Sector?oldid=786718"
Community content is available under CC-BY-SA unless otherwise noted.