Not much is known about the team, but their cornerstone is their captain and forward Lee Chung-Yun, who is extremely fast and scores goals before anyone is able to stop him.

In the game, they can be challenged again at the space alien's route in Sazanaara, as the first team in the right route. All members are at level 21.

Fire Dragon first appeared in episode 2, to play against Inazuma Japan in their first match of the Football Frontier International Vision 2. During the match, Fire Dragon tried to score with normal shoots. However, Shindou Takuto blocked all their shoots, which made Ibuki Munemasa irritated. Even though Matsukaze Tenma and Tsurugi Kyousuke managed to avoid some players of Fire Dragon, they still got the ball easily stolen from them since they were the only ones attacking.

In episode 3, the match continued and Chung-Yun managed to receive the ball after Inazuma Japan lost it, resulting in him scoring a goal with Rapid Fire. The first half then ended with Fire Dragon in the lead with a score of 0-1.

When the second half started, Fire Dragon's members constantly covered Tenma and Tsurugi. After Matatagi Hayato started attacking on his own, Fire Dragon continuously stole the ball from since his team members didn't trust him. Later, as Matatagi had possession of the ball, Chung-Yun tried to steal the ball. However, his speed was beaten as Matatagi managed to run ahead of him. Matatagi then passed to Tenma, who used God Wind. Do-Hyeon then used Dai Bakuhatsu Harite, but was unsuccessful in stopping it, making the score 1-1. After they just lost a point, Chung-Yun tried to score again with Rapid Fire but Shindou stopped it with Einsatz. Do-Hyeon, using Dai Bakuhatsu Harite, also failed to block Tsurugi's Devil Burst, making the the score 2-1. The match finally ended with Inazuma Japan's victory

When the match was over, some of the member's uniforms were lying on the ground of their changing room, without any trace of the actual members. Significantly, Chung-Yun's was also partially covered with green slime. 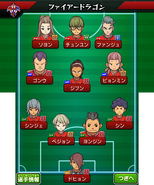 Fire Dragon's formation in the game. 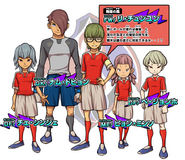 Game artwork of the principal members.

Fire Dragon's formation in the anime.

Chung-Yun's uniform covered with green slime after the match.
Add a photo to this gallery