Fire Tornado was Gouenji Shuuya's main hissatsu throughout season 1 of the anime. He first used it in episode 2 after Endou Mamoru had stopped Teikoku's Death Zone by using God Hand. It scored Raimon's first goal against Genda Koujirou, making the score 20-1.

Fire Tornado was stopped twice by Sugimori Takeshi's Shoot Pocket, first during practise and later in their quarter-final match. In the same episode of the former, Shimozuru Arata also used Fire Tornado, where it broke through Endou's Nekketsu Punch. It was used again against Teikoku in episode 13 in the regional finals, but this time it was stopped by Genda's Power Shield.

In episode, against the SP Fixers, Gouenji scored with Fire Tornado, winning Raimon the match. In the following episode, Fire Tornado was used against in Raimon's second match Gemini Storm, but missed.

Gouenji's Fire Tornado was revealed to have evolved to 改 (Kai) in episode 52, breaking through Segata Ryuuichirou's Wormhole to score Raimon's first goal against Epsilon Kai. In the following episode, it broke through Tachimukai Yuuki's God Hand during practise.

During the selection match for a spot in Inazuma Japan, Gouenji used Fire Tornado 改, but it was stopped by Endou's 真 God Hand. It was later stopped by 真 God Hand again in episode 86 during practise.

The hissatsu evolved into Fire Tornado DD and it is also used by two people.

It appeared for the first time since the original series and was used by the android Kuroiwa Ryuusei to hit Matatagi Hayato. Tsurugi Kyousuke and Matsukaze Tenma tried to stop it, but they failed and all three of them were hit.

Fire Tornado was used by Gouenji in the match between Raimon and Barcelona Orb. However, the shot easily was saved by Alonso Fibiano, who used only one finger to stop it.

It was used during the match between Inakuni Raimon and Seishou Gakuen by Kozoumaru Sasuke. He successfully scored the first and only goal for Inakuni Raimon.

It was later used by the original user, Gouenji, during the match between Kidokawa Seishuu and Seishou Gakuen. The shoot went towards Haizaki Ryouhei, who was the goalkeeper for the match, but Shiratori Tsumuki and Yagihara Katsumi stopped the shoot instead as Haizaki froze after seeing the hissatsu. Kozoumaru stated that Gouenji held back when he used Fire Tornado. Gouenji used it again later in the match, as it was used to form an Override with Triangle Z, Bakunetsu Storm.

Fire Tornado was later used after Haizaki ran forwards, but lost the ball. As the goal was empty, Gouenji shot for the goal. However, the defenders of Seishou Gakuen blocked it with their bodies, sending it out of bounds. After Amano Masamichi was switched back in goal, it was used again, this time scoring a goal, making the score 3-1 for Kidokawa Seishuu.

During the match between Inakuni Raimon and Teikoku Gakuen, Kozoumaru used it to score the 1-0 for Inakuni Raimon. It scored as the members of Teikoku were slowed down by their shoes and their new keeper, Shimerigawa Kageru ducked as the shot came, letting it in. It was used another time on the same goalie in the second half, just like the first time, it scored as the goalie ducked for the shot. This made the score 3-3. Kozoumaru used it later as well after Genda came back in goal. However, it got stopped by Genda's High Beast Fang.

Kozoumaru used Fire Tornado again in the second match against Seishou Gakuen. The shot was too fast for Amano to use his Moja Catch, letting in the first goal of Inakuni Raimon, making the score 3-1.

During the match between Inakuni Raimon and Zeus, Kozoumaru used it to score the first goal for Raimon. However, from Posei Donji's perspective it was going wide, making him think Kozoumaru missed. However, in reality he was aiming for this, as Goujin came running in and headed it behind Donji. It was later used again to create an override with Inamori Asuto's Shining Bird to create Bakunetsu Storm, scoring the third and winning goal.

Fire Tornado was used again during the match between Inakuni Raimon and Hakuren. After Goujin intercepted the ball, he passed it to Kozoumaru, who used his technique. Hakoda got his arm in front of the shot, but he couldn't stop it, letting in the first goal of Inakuni Raimon, making the score 1-1.

Kozoumaru used this hissatsu once again during the match between Inakuni Raimon and Eisei Gakuen but instead of scoring a goal this time, Saginuma Osamu was able to stop the shoot with his hissatsu, Wormhole. Kozoumaru used it later again, and again Saginuma was able to stop the shot with his Wormhole. However, as the ball came down after saving it, Goujin came in and headed the ball behind Saginuma, much to his surprise.

During the match between Inakuni Raimon and Tonegawa Tousen, Kozoumaru used it twice. He first fired it towards Endou Mamoru, but he easily kicked the ball back, shocking Raimon. He later used it again, and used Goujin to redirect the shot. However, this was also stopped by Endou, as he dived to the corner with his Majin The Hand. Later, Kozoumaru used Fire Tornado again, and Goujin redirected the shot again, but again, Majin The Hand managed to stop it. Michinari Tatsumi then came up with a plan, and Kozoumaru fired Fire Tornado straight at Endou. Asuto then passed the shot towards Goujin with Inabikari Dash and Goujin finished it off with Backdraft, breaking through an incomplete Fuujin Raijin. When the trio tried it again, the Fire Tornado Backdraft combination was stopped by Fuujin Raijin, which Endou mastered.

During a show off between Kozoumaru Sasuke and Fubuki Atsuya, Kozoumaru managed to steal the ball from Atsuya and fired on the empty goal with his Fire Tornado, giving him the win in the mini battle.

During the match between Inazuma Japan and Guardians of Queen, Gouenji made his entrance and used Fire Tornado trying to score a goal. However, Racerit Spot was able to stop it since his supporters boosted the power of his technique, Tricera Shield.

The user jumps up and spins from left to right while their legs are surrounded by a stream of fire and the ball floating near them. When the user gets high enough, their body in a horizontal position, the fire gathers in their left foot. The user then sets the ball ablaze as they kick it forward. The ball is followed by a stream of fire as it travels to the goal.

In Inazuma Eleven Reloaded, Ares no Tenbin, and Orion no Kokuin, the user lifts their leg and does a back flip, kicking the ball behind them and into the air. The user lands and crouches, causing a ring of fire to surround them. The user quickly jumps up and spins up in the air (depending on the user, they can spin from left to right or right to left), with a stream of fire surrounding them. The fire is then transferred to the ball as the user makes contact with it using their foot. The ball flies towards the goal with a stream of fire trailing behind it.

Fire Tornado as seen in the first game.

Fire Tornado in the GO game.

Fire Tornado in the manga.

Fire Tornado in the TCG. 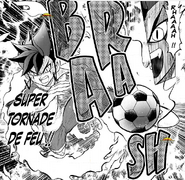 Retrieved from "https://inazuma-eleven.fandom.com/wiki/Fire_Tornado?oldid=851025"
Community content is available under CC-BY-SA unless otherwise noted.