This hissatsu is the combination of two Fire Tornado. It is very similar to Double Tornado and Fire Tornado. Tsurugi Kyousuke asked Matsukaze Tenma to learn Fire Tornado DD with him in order to use it in the finals. They practiced the move at the Kasenjiki multiple days till it became night but never really succeeded in using the move properly.

Tenma and Tsurugi succeeded in performing the hissatsu when they used it in the finals of the Holy Road between Raimon and Dragonlink. Fire Tornado DD was able to break through Senguuji Yamato's Kenou Kingburn's King Fire, scoring the third goal for Raimon.

Fire Tornado DD was used in episode 23, where it was used to score a goal against the members of Zanark Domain.

In the Chrono Stone game, it evolved into Fire Tornado TC.

It was used in the crossover movie in a combined attack with Inazuma Legend Japan's Inazuma Break and Last Death Zone to destroy the Holy Road stadium scoreboard in order to get rid of the LBX army.

It was used again but in episode 40 to score the first goal for the Earth Eleven against Ixal Fleet.

First two people would spin around and create a fire which surrounds them by spinning, later both goes up and kick it towards the goal with one leg of each person. This technique only works if the two users sychronize each others movements. 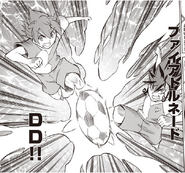 Fire Tornado DD in the manga.

Retrieved from "https://inazuma-eleven.fandom.com/wiki/Fire_Tornado_DD?oldid=812295"
Community content is available under CC-BY-SA unless otherwise noted.