He wears a yellow-white thawb with trousers in the same colour. He has thin mustache, small beard and brown hair that goes into one spike at the bottom of his head. He has turquoise eyes and fair skin tone.

On the first sight he seems to be rather calm, without nerves. He doesn't say much.

He was seen before the match with Inazuma Japan started, while standing next to Saudi Arabia's coach Eva Gordon. After Inazuma Japan scored their first goal and Saudi Arabia's counterattack failed, he stated that they didn't even show the half of their true power yet. When coach gave them new orders they changed their play immediately. Both teams played hard, tried to use every opportunity to score goals. However, finally it was Inazuma Japan, who managed to defeat the opponent and won with two points. 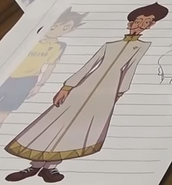 Flash Haniwa's design.
Add a photo to this gallery

Retrieved from "https://inazuma-eleven.fandom.com/wiki/Flash_Haniwa?oldid=819617"
Community content is available under CC-BY-SA unless otherwise noted.