Garu (ガル) is an antagonist team in the Inazuma Eleven GO Chrono Stone series. It's one of the teams of Feida, led by Fei Rune.

They were seen watching the first and second matches of Ragnarok.

In episode 44, the match opposing them to El Dorado Team 03, which would determine the world's leader, started. The fact Fei was their captain surprised a lot the Raimon players from El Dorado Team 03. At the beginning of the match, Garu's players let the adverse players play the way they want. Taiyou got the ball and used his Keshin Armed for the first time and then shot. However, Fei then intervened and easily stopped his shoot. Then, Garu counter-attacked, and the players made several passes. In front of El Dorado Team 03's goal, Fei used Bouncer Rabbit which broke through Shinsuke's Buttobi Punch and scored his team's first goal. Tenma kept trying to make Fei back to normal, but this one said he would fight against the ones who don't accept him, and would show Tenma the Second Stage Children's superiority and their power.

Garu lead the whole first half, with Fei beating his old teammates one by one without any regret. He scored a second goal for Garu, and the first half ended after Tenma got beaten once more time by Fei.

The second half started with Zanark playing for El Dorado Team 03. Garu attacked again, but Zanark easily got the ball from their players and made fun of them. After he told his teammates about his harsh training and how he Mixi Maxed with Clara Jane, he used his Mixi Trans, thus becoming Super Zanark. He then used Great Max na Ore, which broke through Chet's Keshin hissatsu, and reduced the score to 2-1. Because of his goal, El Dorado Team 03's players got confident, and were able to stop Garu's players from advancing through the field. Later, Zanark scored a second goal for his team.

Garu's uniform consists of a long-sleeved dark blue undershirt under a white shirt with a dark blue collar, as well as a red vest on the outside. Fei Rune's outfit is an exception: he has an orange vest instead. The shorts are dark blue with white stripes down each side, as well as white tights. The cleats are dark blue with a white bottom. The captain's band is a sky blue color. For the goalkeeper, he is wearing a black, longsleeved shirt with a white collar under a blue vest. The goalkeeper also has bright blue gloves.

Zanark ready to use Mixi Trans. 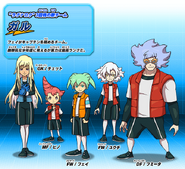 Garu on the official site.

Garu's concept artwork.
Add a photo to this gallery

Retrieved from "https://inazuma-eleven.fandom.com/wiki/Garu?oldid=834579"
Community content is available under CC-BY-SA unless otherwise noted.