Giru (ギル) is an antagonist team in the Inazuma Eleven GO Chrono Stone universe. It's one of the teams of Feida, led by Meia.

Giru played against El Dorado Team 02 in the Ragnarok Stadium. They lost with the score of 4-3.

Giru's uniform is a blue and white tunic. The top is mostly blue with white patches on the shoulder and the front, and has a gold stripe through the center. The top part of the long, blue sleeves are bulkier than the rest. The tunic also has a pink and gold-rimmed belt through its center. The uniform also consists of dark blue, almost gray, tights, and dark blue and white cleats. The captain's band is light blue. For the goalkeeper, the uniform is the mostly the same, except the purple top, white gloves, and light blue belt. 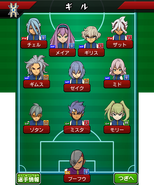 Giru's formation in the game.
Add a photo to this gallery

Retrieved from "https://inazuma-eleven.fandom.com/wiki/Giru?oldid=834580"
Community content is available under CC-BY-SA unless otherwise noted.