God Hand was Endou Mamoru's first hissatsu technique and his main technique during season 1 of the anime.

God Hand was broken through for the first time during the regional finals against Teikoku in episode 13 by Koutei Penguin 2gou. Later though, Endou was able to stop the hissatsu with God Hand by using both of his hands.

God Hand would fail to stop hissatsu techniques several times after this, with the first time occurring in episode 14 by the Inazuma Eleven's Honoo no Kazamidori. In Raimon's first national Football Frontier match against Sengoku Igajima, God Hand once again failed to stop a shoot, being broken through by Kirigakure Saiji's Tsuchidaruma. In episode 19 though, God Hand was able to stop Ichinose Kazuya's Spinning Shoot.

God Hand was used three times in the semi-finals against Kidokawa Seishuu in episode 21. It first managed to stop Mukata Tsutomu's Back Tornado, but later fell to the Mukata siblings' Triangle Z, even with Endou using both of his hands. God Hand was able to stop a second Triangle Z, but only thanks to the assistance of Kabeyama Heigorou and Kurimatsu Teppei. During the finals against Zeus, God Hand was used twice, but was broken through both times by Aphrodi's God Knows and Demeter's Reflect Buster.

In episode 32, Endou used God Hand against Hakuren, where it was frozen and broken through by Fubuki Shirou's Eternal Blizzard. It was used again against Shin Teikoku Gakuen, where it failed to stop Sakuma Jirou's Koutei Penguin 1gou. Later, it managed to stop a regular shoot from Fudou Akio. In episode 40, God Hand was able to stop Butterfly Dream in Raimon's match against Osaka Gals CCC.

Endou's God Hand evolved twice in Raimon's match against the Dark Emperors. After stopping a shoot from Kazemaru Ichirouta, it evolved to 改 (Kai) to stop Triple Boost. It later evolved to 真 (Shin), allowing it to stop Dark Phoenix.

真 God Hand was used in the selection match for Inazuma Japan to stop Gouenji Shuuya's Fire Tornado 改. It was able to stop Fire Tornado again in episode 86 during practise. Endou used 真 God Hand once more in episode 127 in Raimon's graduation match, where it stopped Koutei Penguin 2gou.

A blue variant of God Hand was used by Tachimukai Yuuki. He first used it in episode 43, where it was able to stop Ichinose's Spiral Shot and Urabe Rika's Rose Splash. He also used it during practise in episode 53, where it was broken through by Gouenji's Fire Tornado 改. During Tachimukai's training to create a new hissatsu, he used God Hand to stop Tsunami Jousuke's Tsunami Boost.

A red variant was first seen in episode 118, being used by Rococo Urupa alongside Endou's God Hand to stop a tire from hitting Raimon Natsumi.

Endou temporarily joined Tenmas as goalkeeper in the match between Tenmas and Protocol Omega. Endou used God Hand and successfully stopped Alpha's shoot and surprised him, as Endou shouldn't be able to use God Hand before the match between Raimon and Teikoku Gakuen.

The user gathers energy into their right hand, then raises it to create a large hand connecting to the user's hand with energy bolts. The user then thrusts the hand forward to catch the ball.

God Hand in the GO game.

God Hand in the Ares no Tenbin game trial.

God Hand in the manga.

真 God Hand in the TCG.

God Hand in the English Original's anime localization.
Add a photo to this gallery 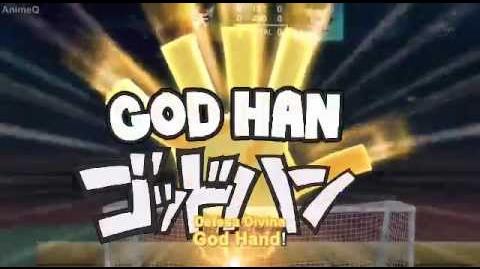 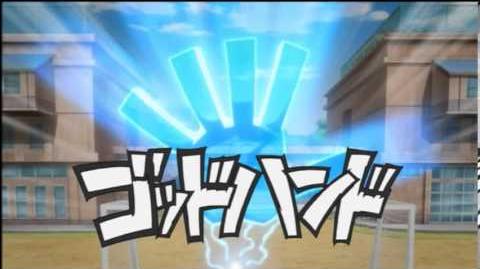 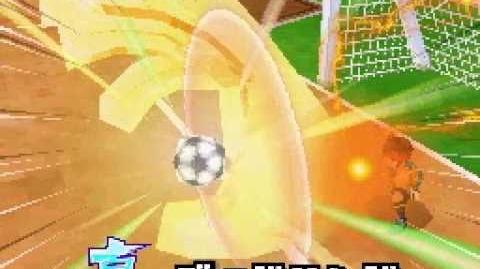 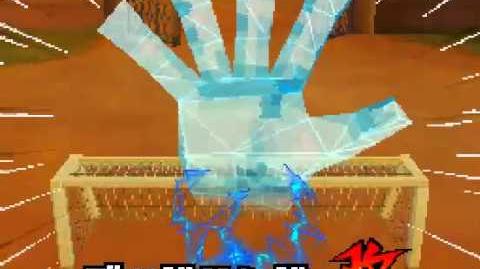 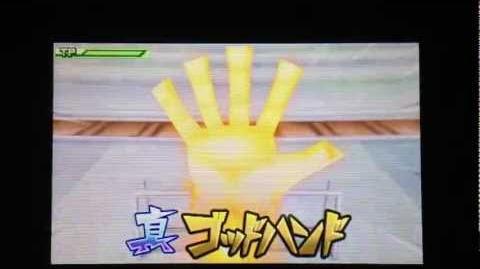 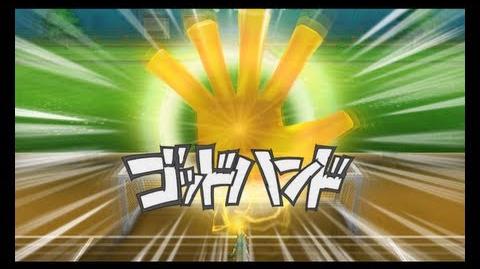 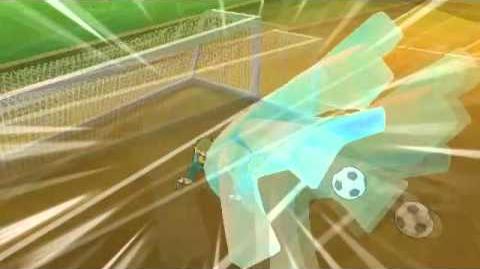 Retrieved from "https://inazuma-eleven.fandom.com/wiki/God_Hand?oldid=850412"
Community content is available under CC-BY-SA unless otherwise noted.