This page is about the Hakuren team of Inazuma Eleven Ares no Tenbin, for other Hakuren teams, visit Hakuren (disambiguation).

Hakuren () is a team in Inazuma Eleven Ares no Tenbin.

Hakuren is a team from Hokkaido, in the north of Japan. They are carried notably by the Fubuki brothers and Someoka Ryuugo, who came in as a reinforcement member. If the defense is pretty weak, Hakuren is much stronger at offense, where the midfield is well-organizated and quick at starting offenses, where Someoka is now an organizing forward than he was during his time at Raimon, and the Fubuki brothers are the main goal scorers of the team. They also have a secret weapon in the person of Shiratoya Nae. Originally a very good sprinter, Nae choose to reoriented herself in football and uses her past experience to cause troubles to the opponent team by a clumsy way.

Their uniform is a white, long-sleeved t-shirt with blue snowflake-like streaks on sleeves, blue collar and blue team mark, fitted along with blue shorts with white streaks. Socks are white, and cleats are white and blue. The goalkeeper uniform is khaki, long-sleeved with light gray snowflake-like streaks, white team mark and white collar fitted along with light gray shorts, gray gloves, brown socks with white streaks and blue cleats. The captain's band is light green. The sponsor's name is written in blue on the field uniform and in white on the goalkeeper uniform. 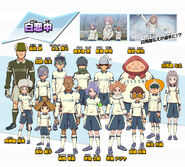 Retrieved from "https://inazuma-eleven.fandom.com/wiki/Hakuren_(Ares)?oldid=824922"
Community content is available under CC-BY-SA unless otherwise noted.