Hisoka Masoka (ヒソカ・マソカ) is a midfielder for Arab no Hinotori Gundan.

Hisoka has slightly tanned skin tone and is quite tall in height. He has short, maroon-red hair which forms a spike above his head and is colored gray at the sides. He also has a thin, black beard, a long face, arrow-shaped eyebrows and small, teal eyes, with black markings below them.

When the match between Inazuma Japan and Arab no Hinotori Gundan started Hisoka passed the ball to Andreas Bebo. When Ichihoshi Mitsuru approached Andreas, Hisoka warned him not to talk with Ichihoshi because his incompetence would rub off of him. After that Hisoka got the ball again and was running toward the Japan's goal. He was blocked by Kazemaru Ichirouta who stole the ball from him. While Hisoka, Andreas and Silva Leol were attacking Kazemaru, Ichihoshi used a mirror hidden in his cleats to blind him. He was successful and Kazemaru got injured in his leg by the opponents players. Hisoka stated that now there was a hole in Japan's defense. Then Saudi Arabia players paid their attention to another key player which was Fubuki Shirou. Fubuki managed to avoid their attacks until Ichihoshi pushed him. Then he got injured his leg in the same way as Kazemrau did. After that Hisoka passed the ball to Andreas to score some goals but Andreas was quickly blocked with Iwato Takashi's hissatsu technique The Wall. Then Inazuma Japan easily scored the leading goal which shocked Hisoka and Andreas. When they passed by Ichihoshi, Hisoka said that they've heard about his incompetence but didn't know he was so worthless. He talked to Andreas wondering if they should target another Inazuma Japan's player, right after they got new orders from their coach Eva Gordon. When the second half of the match started, he moved with Andreas towards trembling Ichihoshi to take away the ball. After he broke down, they didn't see any danger in him anymore. When at the end of the match Ichihoshi transformed into Hikaru and tricked Andreas, Hisoka made a slide to regain the ball. Ichihoshi, thanks to his analytical sense, unmistakably predicted Hisoka's movement and passed him in the air. Then Saudi Arabia lost with a score 0-2. 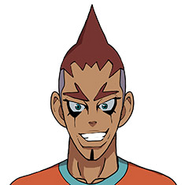 Hisoka's headshot.
Add a photo to this gallery

Retrieved from "https://inazuma-eleven.fandom.com/wiki/Hisoka_Masoka?oldid=807309"
Community content is available under CC-BY-SA unless otherwise noted.