Hunter's Net was first used by Kariya Masaki to block Koutei Penguin 2gou in episode 21 against the Akizora Challengers .

In episode 22 and 23, Kariya used it to block shoots of Ichimonji Kirito. Also in episode 23, Hunter's Net was broken by Tactics Cycle, the hissatsu tactic of Gassan Kunimitsu.

Kariya used it again in episode 27 to block Yukimura's keshin hissatsu; Icicle Road but failed to do so. Though, it was able to lessen the force that reached the goal, that is why when Matsukaze Tenma used Majin Pegasus to block it, he was able to stop it from scoring from some help with Hunter's Net.

In episode 30, Kariya used it again to block Taki Sousuke from advancing through the field three times.

At Inazuma Town's riverbed, Matsukaze Tenma, Shindou Takuto, Nishizono Shinsuke, Sorano Aoi, Yamana Akane and Seto Midori were thinking back at the opponents Raimon has faced so far during the Holy Road tournament and this hissatsu was seen in their flashback.

It was used again during the match against Genei Gakuen, in episode 34. It was broken by Genei no Dalamanglass's shoot.

Kariya used Hunter's Net in episode 38, against Sunshine Force. But it failed because it wasn't fast enough.

It was used again in episode 42 to stop Bakunetsu Storm but it failed again.

Kariya tried to block Hakuryuu's White Breath using this hissatsu with Amagi's and Kirino's hissatsu, but failed. Later, with the help of Kirino's Deep Mist, he blocked Rinne Makoto's Tekki Hei Knight B from advancing through the field while it got captured in it.

Kariya used it twice in episode 29, to stop Goburis. The first time it failed, and the second time Kariya made it evolve to V2, and it worked.

It was used again in episode 43 by Kariya but it was easily broken by Zatto in the match of El Dorado Team 02 and Giru.

The user first slashes the air with his/her hand having violet strings appear, then with his other hand he slashes again another set of strings appear again completing a full laser net that is stitched in to stop the opponent. When the opponent comes near it, he/she bounces off and the ball lands near the user. 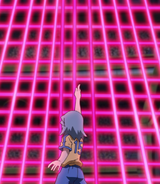 Hunter's Net as seen in the GO movie.

Hunter's Net in the game.

Hunter's Net used as a Shoot Block in the Wii game.

Hunter's Net ∞ in the Galaxy game.

Retrieved from "https://inazuma-eleven.fandom.com/wiki/Hunter%27s_Net?oldid=828243"
Community content is available under CC-BY-SA unless otherwise noted.