Mitsuru has fair skin tone and is average in height. He has dark-blue, neck-length hair with two bangs coming down onto his forehead. He also has sea-blue eyes. He wears a yellow, short-sleeved jumper with white stripes, blue shorts and white shoes with blue stripes on both sides.

Mitsuru is cheerful boy, full of enthusiasm and passion to soccer. He cares a lot for his brother and really appreciates his advices.

Mitsuru appeared for the first time in his brother's flashback where he was seen playing soccer. He asked their father if they were good enough to go to the world as he did. Their father stated that they could definitely do it but the road to the world was long and hard and they should keep practice daily. Mitsuru ensured him that they would do it. In the next flashback Mitsuru played soccer with his brother again. Hikaru advised him what he should do to improve his shooting. He promised to look over his play from now on and stated that they were the strongest team.

It was revealed that Mitsuru and Hikaru had a car accident as a child, which caused their father's death. After that the Orion Foundation took care of Mitsuru and Hikaru had a serious illness. He moved on a wheelchair. The only way to save Hikaru was a surgery carried out by a specialist in America. That's why Mitsuru decided to cooperate with the Orion Foundation and be obedient to their orders to cure his younger brother. Hikaru was seen as an older boy saying that he was very proud to have a soccer player as his brother, stated that he was his hero. Because Mitsuru did his hardest at soccer, it encouraged Hikaru to fight with his illness. Hikaru also stated that playing soccer was fun but he loved watch his brother play even more. If he could play soccer in Hikaru's place, Hikaru would be happy.

In the next flashback it was seen how young Mitsuru was playing match with his team. Hikaru was cheering him up from the stands. He was very proud that Mitsuru shot three goals but also stated that he could do it even better. He said that he was an amazing player so he needed to keep it up and try his best. Mitsuru thanked him for pointing precisely what he needed to work on. They were talking about their father who was going to see the next match and Mitsuru said that he must work harder to show how much he has improved.

During the match between Inazuma Japan and Arab no Hinotori Gundan, it was revealed that in fact Mitsuru is dead. After the car accident happened, he managed to save his younger brother from the smashed car and died due to injuries he got. During the hospital treatment, Hikaru took over his brother's personality. Because he got two different personalities he behaved like two different people. While he was in the hospital he was Hikaru and moved on a wheelchair, when he went outside his older brother Mitsuru took control. During the match Hikaru finally managed to handle with his pain and despair and he united with his brother. In Hikaru's heart and thoughts he would always remember Mitsuru, because together they were the strongest team and they could achieve everything.

Mitsuru collapsed on top of Hikaru.

Hikaru and Mitsuru inside Hikaru's mind. 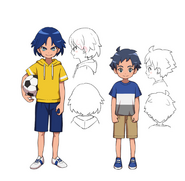 Young Mitsuru and Hikaru's concept artwork.
Add a photo to this gallery

Retrieved from "https://inazuma-eleven.fandom.com/wiki/Ichihoshi_Mitsuru?oldid=828083"
Community content is available under CC-BY-SA unless otherwise noted.