It was later used during the match between Inakuni Raimon and Teikoku Gakuen. Asuto used it to dribble past Kazemaru Ichirouta and score the goal for the 2-0 for Inakuni Raimon.

Asuto used it again during the match between Inakuni Raimon and Eisei Gakuen. He stole the ball from Midorikawa Ryuuji and got past him, advancing towards Eisei Gakuen's goal.

During the match between Inakuni Raimon and Tonegawa Tousen, Asuto used it to pass a Fire Tornado at the last moment towards Goujin Tetsunosuke, so he could score a goal against Endou Mamoru with his Backdraft. The first time they used this move, they managed to score, breaking through an incomplete Fuujin Raijin. However, the second time Endou blocked it with his Fuujin Raijin.

It was used by Asuto to help himself and Ichihoshi flee from a wild dog in the forest of Mount Fuji.

It was used again during the final match of the Football Frontier International, where Nosaka ordered Asuto to use it to mark the Soccer Zatsugidan's captain, Zhou Xing. This broke the hissatsu tactic, Shourinji Kousoku Juuhachijin, as it got rid of the clones.

Asuto used this technique again during the match against Muteki no Giant. Asuto managed to dribble past Domelgo Dominguez after using The General.

The user starts running really fast, and then jumps while turning in lightning. The user flips and grabs the ball between both feet. The user then flips back over the opponent while lightning strikes behind him. The user lands with electricity over his body and then runs away.

Inabikari Dash in the Ares game. 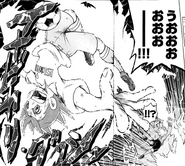 Inabikari Dash in the manga.

Retrieved from "https://inazuma-eleven.fandom.com/wiki/Inabikari_Dash?oldid=836920"
Community content is available under CC-BY-SA unless otherwise noted.