This article is about the main protagonist team that appeared in the Ares no Tenbin series. For other uses, see the Raimon (disambiguation). 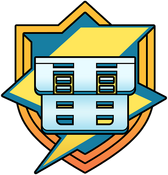 Inakuni Raimon was formed thanks to the will of the former members of Inakuni soccer team, recently got disbanded and Fuyukai Suguru, who sent them to Raimon afterwards with his ties with his former school. They succeed to the former Raimon team, which all members left for different schools after their defeat 0-13 against Barcelona Orb. They are considered as title holders and got placed in the block A of Kanto.

The jerseys have yellow as a base colour, with yellow collars, and a bluish-green stripe in the form of a lightning bolt on the sleeves, it is matched with bluish-green shorts. The goalkeeper uniform is purple with bluish-purple sleeves, which have two purple stripes. This is fitted with purple shorts. Their socks are bluish-green with a yellow stripe at the top — except the goalkeeper's which is bluish-purple — with a white stripe at the top. On the uniforms, a lightning bolt is imprinted on them. The captain's band is colored red and all members wear bracelets consisting of the colors yellow and blue.

Inakuni Raimon without a sponsor.

Retrieved from "https://inazuma-eleven.fandom.com/wiki/Inakuni_Raimon?oldid=849012"
Community content is available under CC-BY-SA unless otherwise noted.