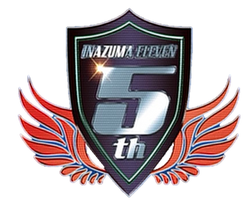 This is a special team that was revealed after the announcement of the substitute for Inazuma Best Eleven on December 4th, 2013.

It is known that there was an animated episode for the match between this team and Inazuma Best Eleven which, was released on the 13th of June, 2014. This match was also played at Holy Road Stadium.

Their uniforms are similar to Teikoku Gakuen's, which is a green t-shirt with red streaks on the sleeves that is fitted along with brown shorts. The goalkeeper uniform is an orange, long-sleeved shirt with dark brown streaks and a black undershirt that is fitted along with black shorts. Their logo is a black shield which also has 5th on it with red wings.

Inazuma Battle Eleven in the manga.

Retrieved from "https://inazuma-eleven.fandom.com/wiki/Inazuma_Battle_Eleven?oldid=819343"
Community content is available under CC-BY-SA unless otherwise noted.