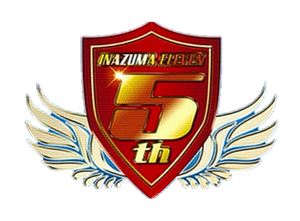 This team is a special team that had its players selected by the Japanese audience, which was held as a celebration of the anime series, having been aired for 5 years. Each position had 5-10 candidates, depending on the number of players needed. Voting results were announced during episodes 25 to 29. All members were announced on December 4th, 2013.

It is known that there was an animated episode for its match against Inazuma Battle Eleven, which was released on the 13th of June, 2014. This match was also played at Holy Road Stadium.

They won the match against Inazuma Battle Eleven with 3-2.

Their uniform is similar to Raimon and has a light yellow t-shirt with blue sleeves and a collar, fitted along with blue shorts. Their socks are white and their cleats are dark green. The goalkeeper uniform is green, with long orange sleeves (the sleeves have two green stripes on them) and is fitted along with green shorts. There is also a logo on the shirt, which has the number 5 on it with white wings, and the captain's band is orange.

Retrieved from "https://inazuma-eleven.fandom.com/wiki/Inazuma_Best_Eleven?oldid=824679"
Community content is available under CC-BY-SA unless otherwise noted.