This move was used to break the Mugen no Kabe of Senbayama Junior High. It later evolved to Inazuma Break V2 to break Shin Mugen no Kabe of Neo Japan. The hissatsu was stopped two times in the original series. The first time was in the game against Gemini Storm, the goalkeeper Goryuu Reo caught the hissatsu without any difficulty. The second time was in the match against Diamond Dust, the midfielder Touchi Ai stole the ball when Kidou was starting the formation of the hissatsu.

It was used in the crossover movie in a combined attack with Fire Tornado DD and Last Death Zone to destroy the Holy Road stadium scoreboard in order to get rid of the LBX army.

The manual for Inazuma Break can be bought for 10000 Nekketsu points at Cotarl's hissatsu store.

The first kicks the ball to the air while the second and third run past him. Then the ball creates a purple atmosphere as if the ball was inside, then lightning strikes downwards with the ball. The three users jump, the first one with a normal kick, and the second and third doing a bicycle kick. They all kick the ball at the same time while in the air, and the shot heads towards the goal. 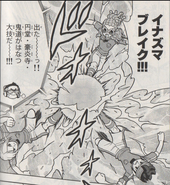 Inazuma Break in the manga.

Inazuma Break V2 in the TCG.

Retrieved from "https://inazuma-eleven.fandom.com/wiki/Inazuma_Break?oldid=835117"
Community content is available under CC-BY-SA unless otherwise noted.