View source
Inazuma Eleven Eiyuutachi no Great Road
Gallery
This article is about a piece of media of the Inazuma Eleven universe that has not yet been released. As such, it is a reflection of what is currently known about it, rather than coverage of it as a whole. 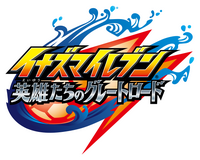 Information about the series was first released in a Nico Video Stream on June 24, 2016. The series started on an island shaped like the Japanese letter イ, which is the first letter of Inazuma Eleven, but the setting quickly changed to Inazuma Town. Hino Akihiro confirmed that the series will take place during Endou's era, meaning no Keshin or interstellar exploits. This allows the story to focus on youth soccer exclusively, instead of school life or pro leagues like in the previous series.

The series, Inazuma Eleven Ares no Tenbin, was officially announced in "LEVEL-5 VISION 2016: New Heroes" with the game, the anime and the toys in development. The series takes place in a parallel world of the second game where the alien attack didn't happen. The original Raimon members are spread across the country to strengthen teams as a "reinforcement committee". Instead of having three main characters from the same team, they are spread across three different schools, Inamori Asuto from Inakuni Raimon, Haizaki Ryouhei from Seishou Gakuen and Nosaka Yuuma from Outei Tsukinomiya.

The game was planned to release in Summer 2018 but got multiple delays (Fall 2018, Winter 2018 and after May 2019). The anime series and its sequel, Inazuma Eleven Orion no Kokuin, eventually ended while the game is still under development.

In September 2019, just before the airing of Orion no Kokuin's final episode, Hino announced that they decided to changed its name to Inazuma Eleven Eiyuutachi no Great Road, to add more story of the characters outside the Ares no Tenbin series, and planned to release it in Spring 2020.

On April 1st, 2020, Hino announced an upcoming plan for the new game. Instead of following the Ares no Tenbin story as originally planned, the game will have a completely new storyline, it will be a remake of the Football Frontier arc from the original Inazuma Eleven, and will feature characters from both the GO series and the Ares no Tenbin series as part of the same timeline. The story will focus on the new protagonist, Sasanami Unmei, a soccer-loving boy with a mental trauma which makes him unable to play soccer, who decided to join Raimon's soccer club as a manager after he met Endou Mamoru. The game was expected to release in 2021.

After one year with no update on the game, on April 2nd, 2021, Hino posted an update video on his blog. The video contains some new in-development footage of the game with several major characters from all three series appear in the background. The building and character model were changed from the more realistic scale, seen in the early development of Ares no Tenbin and AC games, to the smaller scale and less detailed, similar to GO games. The game is now delayed to 2023.