Inazuma Eleven Everyday!! (イナズマイレブンエブリデイ!!, Inazuma Irebun Eburidei!!) is a game released for a limited time by Level-5 for the Nintendo 3DS platform.

This game can only be downloaded after redeem 2 codes from 2 different titles. The titles which the code is included are:

Endou and Gouenji as the playable characters

'Patting' Endou on the head. 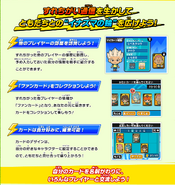 Choosing to play as Endou or Gouenji

Endou raising his hand to answer a question

Community content is available under CC-BY-SA unless otherwise noted.