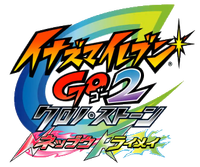 Inazuma Eleven GO: Chrono Stones: Wildfire and Thunderflash are the names for the European and Australian releases of the game, and they were released on March 27, 2015.

The story begins following the competition of the Holy Road soccer tournament. Tenma returns to Raimon Junior High, but finds that things have changed. The Raimon soccer team members are not soccer players. In fact, there is no soccer club at the school. Shinsuke is in a different club from Tenma. Is this a parallel world? Tenma wonders. That's when Alpha appears before him.

A future organization called El Dorado is an organization formed by the future world's countries to deal with important matters of world affairs, and for some reason, they've determined that soccer must be destroyed. To do so, they have assigned Alpha and his team, Protocol Omega the mission of ridding soccer from the world.

To help Tenma out, Fei Rune, someone from the same future as El Dorado, comes to help him save soccer and defeat El Dorado. The Inazuma Caravan from Inazuma Eleven GO makes a comeback as a flying time machine. As Tenma begins his journey to save soccer, he must learn how to master keshin armed, a technique where one's keshin becomes a form of armor, and Mixi Maxing, where through the Mixi Max gun, two people's auras can combine.

Inazuma Eleven GO 2: Chrono Stone is an RPG action/sport based game. Whilst not in match mode, you can control the character set as the first person to go where you want them to go with either the circle-pad, control-pad or with the stylus. You can change the view of the top screen using the L and R buttons on the top left and right of the Nintendo 3DS, to make it easier to find items, or Parallel Stones. Along with the person you are walking and talking to people with, you can have two other characters walking/running behind you. Although, when you run into a soccer battle, you play with the first five players listed in your team (which can be changed).

Whilst you are playing a team in a soccer match, you control your team using the stylus, drawing blue arrows to tell them where to go, in which they start to run there. You can pass to members of your team by tapping on the bottom screen where you want the ball to go; if you tap it near to a player, but not to them, they will quickly sprint to that place. On the right side of the bottom screen, you can see a Hand, a T sign, a 化 (Keshin) sign and an M sign, which are all options to help you through the match. The hand option is to pause the match, in which then you can draw arrows for players to move to and say where to pass the ball. The T option lets you use a hissatsu tactic. Hissatsu Tactics help you get to certain places on the pitch without interacting with players or can help you get the ball back. The 化 option lets you summon a Keshin. Keshin power you up and gives more chance of keeping possession of the ball. Keshin also has Keshin hissatsu, which can be stronger than regular hissatsu.

New to the series is Keshin Armed, which is using your Keshin as armor, powering up your hissatsu and lowering their TP cost to 0, so you can use hissatsu for as long as much as possible without restraint until your KP (Keshin points) runs out. The new M sign lets you use Mixi Max. Mixi Max strengthens the players' stats, making their hissatsu more powerful. Mixi Max also changes the appearance of the player. Be aware that you can only summon three Keshin and use three Mixi Max at a time. Also, the strength of any given hissatsu can now be viewed for the first time in the series.

Genki Points, known as FP, Fitness Points in the EU versions. GP is what allows you to run for a limited amount of time until that specific player gets tired. When a players GP runs out, the player won't run as fast and will show sweat coming from it, showing it is tired. When you have low GP, there is less chance of keeping possession of the ball and evading players. Your GP lowers whilst the player is running, so it is wise to pass a lot so the GP of that player doesn't decrease.

Technical Points are the basics of Hissatsu's in the games. TP allows you to use hissatsu until it runs out. Every character has a different amount of TP, but increase when they level up. As characters have TP, so do hissatsu. For example, Fire Tornado has a TP value of 33 in the first game, so if a character was to have a TP value of 90 in total, when they would use Fire Tornado, the hissatsu TP would take away its own value to the characters TP, therefore resulting in a TP of 57.

In the GO series' games, Keshin are known to have KP (Keshin Points) instead of TP, which are used for Keshin Hissatsu. It works the same as TP, only KP tends to have more value of TP, such as Justice Wing having a value of 85KP (95KP in the Chrono Stone game). When your KP hits zero, your Keshin will disappear, and your player may run slowly, as their GP may be low. When in battles, fighting for the ball, or dribbling away from someone, you lose only a few KP.

Note: Amemiya can be recruited in Raimei while Hakuryuu in Neppuu after clearing the main story (the community masters for both players are located at God Eden island).

Community content is available under CC-BY-SA unless otherwise noted.