The development of Inazuma Eleven SD was announced during Inazuma Walker March volume (イナズマウォーカー 3月号) on March 1 and later officially confirmed on September 12. Originally, it was to be released in October 2019, but the game got delayed thrice (the first one being early December 2019, the second late December 2019 and the final release date being 3 January, 2020).

The battle system is a 5 vs 5 with both teams having one reserve each. There are two types for the gameplay, one where tapping on the characters is needed to perform actions while the other one is a drag-and-release mode called Ohajikick, a pun on Ohajiki and kick. Each team has a coach and a manager as well who can give the team an addition or GP/TP recovery.

The game features an amount of characters from all 3 main series: Original series, GO series and Ares no Tenbin series (including Orion no Kokuin series).

The characters are called "figure" (フィギュア), each figure has one position and one element.

Each figure can be trained with 6 options; reinforcement, skill, hissatsu technique, limit break, rank up and kizuna.

Each figure has 6 stats; GP, TP, Kick, Dribble, Block and Catch. Each stat can be reinforced with the items.

Each figure has an amount of skills corresponding with their rank, the skills can be unlocked by using required manuals.

Each figure has two hissatsu techniques, one is unreplaceable while the other one is replaceable with hissatsu manuals like in the main games. Each hissatsu starts from level 1 and can be leveled up to 10.

Each figure has a rank with 6 ranks in total; E, D, C, B, A and S. Figures can also be ranked up from the lower rank to the higher rank with some conditions.

The game has 3 main in-game currency, "Inazuma Coin" (イナズマコイン) and "Inazuma Coin R" (イナズマコインR). Inazuma Coin can be obtained by playing various modes while Inazuma Coin R has to be purchased with real money. The game also features "Nekketsu Point" (熱血ポイント). Each currencies can be used to buy items and hissatsu manuals, train the figures, and draw the gacha.

One way to obtain new figures is by drawing the gacha (ガチャ). The gacha can be drawed by using Inazuma Coin or Inazuma Coin R, there's also the gacha ticket that can be used to draw the gacha for free.

There's also special tickets that can be used for exclusive gacha, like "Asuto arc Forward Gacha", which only includes forward figures from Ares no Tenbin series. 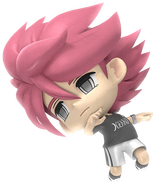 Top 3 winners in event Valentine 2020.
Add a photo to this gallery

【イナズマSDウォーカー】遊び方大紹介スペシャル！！
Inazuma SD Walker
Add a photo to this gallery

Retrieved from "https://inazuma-eleven.fandom.com/wiki/Inazuma_Eleven_SD?oldid=831244"
Community content is available under CC-BY-SA unless otherwise noted.