Inazuma Eleven the Movie: The Invasion of the Strongest Army Ogre
Gallery 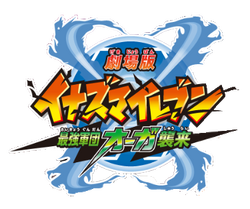 Inazuma Eleven the Movie: The Invasion of the Strongest Army Ogre (イナズマイレブン オーガ, Gekijouban Inazuma Irebun Saikyou Gundan Ōga Shuurai) is the first movie of the Inazuma Eleven series. It is the movie version of the game Inazuma Eleven 3: Sekai e no Chousen!! The Ogre, and is available for purchase in English on the Nintendo 3DS eShop.

The movie starts off with Endou Mamoru arriving at Raimon for the first time and creating the soccer club. Throughout the movie, it shows how members ended up joining the club and facing different teams in the Football Frontier. The finals were coming up, and it was seen that Raimon were training  a lot at the Inabikari Shuurenjou. Raimon found out that the team they were playing in the finals, was the team Ogre, that defeated Zeus with a monstrous score of 36-0. When Raimon played them in the first half, they were struggling with them, not because they were so good, but because they were not even trying until each time Raimon had a chance to shoot. Every member of Ogre was just standing there, preserving their energy. Raimon's offence was getting too tired and soon started to doubt themselves. At the start of the second half, it was the same thing, nothing but struggles. But with only 10 minutes within the game left, Endou Kanon appeared and told Endou that he was here to help. He brought along Fubuki Shirou, Tobitaka Seiya, Utsunomiya Toramaru, Kiyama Hiroto and Fideo Ardena. Raimon started to come back, and eventually  Raimon won the match. After, Endou says he was glad to play them in the finals, he says to them that they should play soccer again sometime, but Baddap Sleed, the captain of Ogre said to Endou that he's not going to fall for his spell for loving soccer. However Endou says that after the match, everyone are friends again, and Baddap starts to understand what he said. After that, a beam of light stops Baddap and Endou from shaking hands and the Ogre players are sent back to their own timeline. Canon and his companions he brought were glad they were able to play soccer with Raimon and soon after they returned to the future. After Baddap and Canon returned to their own timeline, the crowd started to cheer, with Endou wondering why... He suddenly remembers that they won the Football Frontier finals. Everyone celebrates and Endou ends the movie with: "We're Japan's number one!". In the post credits scene, Raimon wonders if Canon really was from the future and Kidou added that Endou should live a long life to see his grandchild born to confirm that.

At the ending credits of the movie, it contained photos along with messages from the characters. The following are the messages that the characters left after the photo:

"I'll be back someday!" by Zaizen Touko

"It was tough acting like an alien" by Midorikawa Ryuuji

"I love everyone!" by Fubuki Shirou

"Be Punctual" by Saginuma Osamu

"Not bad Kidou-kun" by Fudou Akio

"Not gonna lose" by Urabe Rika

"This is such an honor!" by Tachimukai Yuuki

"Ride it, Man! Ride it! by Tsunami Jousuke

"The epitome of Chaos..." By Burn and Gazel

"Welcome back!" by Kakuma Keita

"Next is the world!" by Gouenji Yuuka

"It's not over yet!" by Endou Mamoru
Add a photo to this gallery

Retrieved from "https://inazuma-eleven.fandom.com/wiki/Inazuma_Eleven_the_Movie:_The_Invasion_of_the_Strongest_Army_Ogre?oldid=839783"
Community content is available under CC-BY-SA unless otherwise noted.