If you play in the story mode, Ixal Fleet will be the final team you face in the Galaxy game. Though when being affected by their tactic, Berserk Ray, Galaxy Eleven will replace your original Earth Eleven in the second-half. 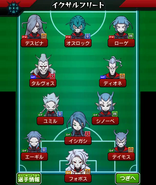 Ixal Fleet's formation in the game.

Ixal Fleet in the game.

Ixal Fleet's formation in the anime.
Add a photo to this gallery

Retrieved from "https://inazuma-eleven.fandom.com/wiki/Ixal_Fleet?oldid=705763"
Community content is available under CC-BY-SA unless otherwise noted.