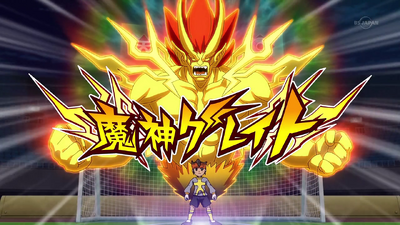 A Keshin (, lit. Incarnation; dub: Fighting Spirit) is an abillity to show a user's spiritual energy, and use it for things such as hissatsu techniques or Keshin Armed.

Keshin are described to be the spiritual energy people create, which is usually invisible to the eye. Though when that power is mastered, it reveals itself in a visible form. It can also greatly reduce the stamina of the user, causing severe fatigue, as shown when Shindou Takuto passed out of exhaustion after using his Keshin for the first time. Shindou also said in Inazuma Eleven GO the Movie: The Ultimate Bonds Gryphon that a keshin user has a limit on how many times it can be used. It is also shown that if a Keshin is beaten by another one, the user will need to wait some time before using it again.

It is notable that SEEDs are the only ones authorized by Fifth Sector to use a Keshin, although there are some users who aren't SEEDs such as Shindou, Matsukaze Tenma, Nishiki Ryouma and Nishizono Shinsuke. Additionally, SEEDs go through rigorous training on God Eden, meaning that there is a high possibility that they learnt their Keshin there.

Android players made by El Dorado can also use Keshins, they will emit a dark red aura instead of a dark purple aura.

Giving a keshin to a player

This option can be unlocked in Inazuma Eleven GO after beating the main story. In order to do so, go to the Steel Tower Plaza and climb up the Inazuma Steel Tower. There, you will see a old man. Talk with him and he will give you the opition to "unlock" a Keshin space to one of your team members in exchange for a Keshin Coin (a purple coin-like item that can be dropped when you defeat a team). After this, go to the menu selection screen and choose the player that you gave the power to use a Keshin. Choose the Keshin slot in his hissatsu menu and it will open a second menu with the Keshin that you can give him/her. Choose one of them and the player you have chosen will receive the Keshin.

In Inazuma Eleven GO 2: Chrono Stone, you can make this option available only when you have completed the main story of the game. Once beaten, go to the Steel Tower Plaza (present time) and climb the Inazuma Steel Tower. There will be a old man standing there and if you talk to him, he'll let you choose which player to give a Keshin to. Though before doing this, you must have at least one Keshin Coin to give to him in return of getting a Keshin. If you want to give a player Keshin Armed as well as a Keshin, you must give the old man two Keshin Coins. You can win Keshin Coins by defeating teams in taisen routes.

Just like previous two games, after beating the main story, go to the old man located at the top of the Steel Tower Plaza and he will give the ability to use Keshin or Souls for 10000 Kizuna points. An additional 10000 Kizuna points are needed for using Keshin Armed.

A Keshin Fusion is when two or more Keshin fuse together, changing its appearance and making it a lot stronger than it was separately. The "tail" of the Keshin depends on how many users it has.

In the match between Raimon and Arakumo Gakuen, Tenma, Shindou and Tsurugi fused their Keshin to make Matei Gryphon. They deflected Taiyou's Keshin hissatsu Sunshine Force and scored a goal for their team.

First, two players run at each other. When they collide with each other, the player has the option to use a Keshin hissatsu or not. If not, the Keshin battle will begin.

Both Keshin prepare to fight for the ball and are ready to punch or slash each other.

When the two Keshin fight, the resulting winner gives his user the possession of the ball and the loser is left on the ground. As with any other command battle, apart from hissatsu, a player is given two choices of action. The left option has a lower chance of success but, win or lose, will shave off a certain amount of KP from the opposing Keshin. The right option has a higher success rate, but it does not damage the opposing Keshin.

A Keshin hissatsu is very much like a regular hissatsu technique, the only difference being the Keshin appearing in it and making it more powerful. Each Keshin has one hissatsu, and a skill that takes effect while the Keshin is summoned.

Retrieved from "https://inazuma-eleven.fandom.com/wiki/Keshin?oldid=837994"
Community content is available under CC-BY-SA unless otherwise noted.