He has blue hair with two spikes on each side and golden eyes. His hair can bend downwards like cat ears on some of the occasions he also has pointy ears. He is one of the shortest members on the team. His original clothing is Manyuuji's uniform which are beige colour Yukata-like uniforms with a pair of short beige pants.

In GO, he is much much taller and wearing a pair of dark-blue trousers and a dark-blue coat. His hairstyle is still the same, though his hair color has become a slightly darker blue and his chin has gotten sharper.

Kogure is a character with a very prankster attitude, it is shown how mischievous he can be through his signature laugh (ushi shi shi shi) which he does after he makes a statement made to make someone get shocked or after he plays a prank. He likes to trick other people. After some interaction with Otonashi and rethinking his attitude, Kogure wishes to join the Raimon team and helps them defeat Aliea Gakuen, after watching Aliea Gakuen demolish his team, he stows away on the caravan and becomes a longtime member of the team, using his impressive agility and capoeira skills during the game. He is seen scribbling in Megane's favorite comic, doing something to Kurimatsu's items, etc. The only one who has even the slightest control over his prankster tendencies is Otonashi.

In GO, it seems that he has a matured a little, though some of his characteristics remain. He does not prank Otonashi anymore and honestly shaked hands with her without tricking her. Though he still does his signature laugh.

He is from Manyuuji in Kyoto, and Otonashi was the one that urged him to be in the Raimon Eleven. Kogure debuted in episode 35. His prankster attitude and mistrust of everyone stems from an event in his youth, when his mother abandoned him at a train station. He was often off the team most of the time due to his lack of trust towards others and his pranks. The Inazuma Caravan visited his school during their travels and the Aliea Gakuen team "Epsilon" threatened to destroy Manyuuji if they couldn't defeat them. During the match, he became scared with Raimon's and Epsilon power, saying that they are crazy. After the match, he joins Raimon Eleven.

Thanks to Otonashi's help, Kogure has find out his true abilities, and thus created his first hissatsu: Senpuujin. And then, in the match against The Genesis, he along with Touko and Tsunami formed a new defense hissatsu called Perfect Tower.

In the FFI arc, Kogure is called by coach Hibiki to the Japan representative selection match. During the game, he uses Senpuujin to steal the ball from Sakuma. Later, he, along with Kazemaru and Kurimatsu successfully deflected Tsunami's Tsunami Boost. He is then chosen as one of the sixteen members of Inazuma Japan. During the match against Fire Dragon, Kogure becames scared with their tactics: Perfect Zone Press.

After the game between Inazuma Japan and Knights of Queen, he smirked that Tachimukai didn't have his own hissatsu, and laughed that he was a captain-copycat, urging Tachimukai to learn his own hissatsu. Though they fought against The Empire and Kogure stated that they (he, Kabeyama, Tobitaka and Kurimatsu) will handle the passing of the ball even with the hissatsu tactics of the The Empire in effect. They also helped Tachimukai in completing Maou The Hand. In episode 100, after he pranked Someoka, Kogure lost himself in the forest. After some time, he encounters Hiroto after being tangled in leaves and vines. Later, the two enter in a match with two Kappas, but were unable to pass by them until Hiroto improved himself.

In episode 126, he played in team B with the other Raimon members that joined later on. During the match he is shown to have evolved Senpuujin to the "真" level. He also used the technique 真 Perfect Tower. It's also known that Kogure became Manyuuji's new captain.

He appeared in episode 21 with his team, Akizora Challengers. They planned to play against another team, and it was said that the team was very excited because they haven't had a match in long time. But after it was canceled, Kogure didn't want to say it to the team, and arranged that they would play against Raimon instead. It is seen that he uses Senpuujin and stopped Sidewinder, but couldn't stop Buttobi Jump.

He lives in Kogarashi Manor with the other members of his team. Ten years later, he appears to be less mischievous and more smarter as Kidou has said that he works at a good company.

Young form
In order to recruit Kogure, the following requirements are needed:

After this, he can be scouted for an amount of 3240 Kizuna points.

After this, he can be scouted for an amount of 1290 Kizuna points.

Young form
In order to recruit Kogure, the following requirements are needed:

After this, he can be scouted for an amount of 1300 Kizuna points.

After this, he can be scouted for an amount of 1050 Kizuna points. Be aware, in order to recruit Kogure, at least three players from the same community master have to be scouted first to make him a scoutable option.

Young form
In order to recruit Kogure, Ixal Fleet has to be defeated first in the story mode. Also, the following requirements are needed:

Kogure in his tuxedo. 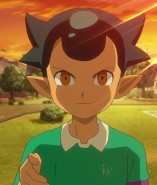 Otonashi and Kogure shaking hands at the end of the match

Kogure in the TCG.

Retrieved from "https://inazuma-eleven.fandom.com/wiki/Kogure_Yuuya?oldid=826441"
Community content is available under CC-BY-SA unless otherwise noted.