Episode 068
Episode 033 (GO)
Kudou Fuyuka ( ) is the daughter of Ono Masataka, the adopted daughter of Kudou Michiya and Endou Mamoru's childhood friend. In Inazuma Eleven GO, she works as a nurse and in the Dark version of the game, she's also Endou's wife.

Fuyuka has fair skin tone and is average in height. She has blue eyes and an innocent appearance. She has long lavender hair tied in a half ponytail. She usually wears a short-sleeved white shirt, a blue skirt, a teal vest, a blue necktie pair of white socks and dark-purple shoes. When she was younger, she had shorter hair that was usually tied in pigtails. She used to wear a white collar shirt, black sweater, pink skirt, purple socks and pink shoes.

In Inazuma Eleven GO, her hair is tied as bun, she wears a white and light-blue nurse uniform, coupled with a white nurse hat and white slippers. In the Dark version of the game, her attire consists of a white t-shirt, a dark-blue pantyhose, green slippers and a light-green apron with blue and white stripes.

She usually speaks with a soft tone and acts like a mother to Inazuma Japan. She does many things to contribute as a manager, such as reading books about nutrition and health to make her food taste better and adding labels on each of the member's bottles and towels to make things easier. She also seems to be a bit naive since she didn't realize that Urabe Rika arranged her a date with Endou Mamoru. In the third game, it's said that before the accident she used to be lively and cheerful.

She became a manager when Raimon Natsumi left Japan to research about Endou Mamoru's grandfather, Endou Daisuke. Kino Aki and Otonashi Haruna helped Fuyuka and taught her things. When she was young (according to Kudou Michiya, it was seven years ago), her father and mother died in a car accident. Kudou later decided to adopt Fuyuka as his daughter.

She first appeared in episode 68, secretly watching Raimon practicing. Endou then went up to her, recognizing her as "Fuyuppe", his friend from the first grade that often called him Mamoru-kun. Fuyuka explained to him that it was her first time in Inazuma Town and she couldn't recall meeting him. She then said goodbye to him, confusing Endou since he was certain that she was his childhood friend. After the selection match, it was revealed that she was the daughter of Inazuma Japan's coach, Kudou. Soon, she became one of Inazuma Japan managers after Natsumi left.

In episode 78, she was worried about Endou's behavior although Zaizen Touko said that he was just searching for a new hissatsu technique. However, Urabe Rika told her instead that Endou was in a great danger and Fuyuka ended up believing her. She then followed Rika's "instructions" to supposedly save Endou, which were to bring him to an amusement park, take him on a thrilling ride, go to a clothing store, showcase the clothes she tried on and finally take him to an ice-cream shop to eat with him.

However, some members of Inazuma Japan were spying on her in the process, believing the fact that she and Endou were dating. Fuyuka eventually found out that she was tricked and said instead that she wanted to tour around Inazuma Town, despite her thinking that it was rather stupid excuse even though Endou believed her. Endou also showed Fuyuka his grandfather's notebook and he was shocked that Fuyuka was the second person that was able to read his grandfather's handwriting. It's then later revealed that it was because her real father had been reading to her one of Endou's grandfather's notebooks when she was younger.

In episode 95, when the entire Inazuma Japan team thought that they were going to lose to Argentina's national team, The Empire, she reminded them to never give up and gave them their confidence back. They then managed to score a last-minute goal with Grand Fire, but they unfortunately lost. After Endou arrived at the end of the match, he told her that she was a good manager and she was happy to hear that from him.

In episode 102, she regained back her memories and found out that her father helped out in the plan to save Daisuke. She also insisted on not having hypnotherapy again because she still wanted to remember.

She eventually kept the last notebook by Daisuke, saying that Endou let her keep it since it was his grandfather's gift to her dad. In the final episode of the FFI arc, she graduated from Raimon, which probably means that she transferred from there sometime after Inazuma Japan won the FFI cup. She graduated like the others from Raimon and her father was happy for her. She was also very happy to see Endou and the others enjoying the graduation match.

She reappeared in episode 33 as a nurse in Inazuma Town's hospital. She's also the nurse who was assigned to look over Amemiya Taiyou. She was happy about Amemiya when he first met Matsukaze Tenma since he talked about him often.

In episode 37, she told Tenma that Amemiya couldn't play soccer again because of a disease that he had since his childhood.

In episode 40, she saw Tsurugi Kyousuke along with Gouenji Yuuka so she called Endou and told him about that.

In episode 44, she spots Shindou Takuto trying to escape from the hospital during the Holy Road finals to warn Tenma. She tries to stop him, but she was convinced by Shindou's motivation to protect his teammates and ended up bringing him to the stadium.

In order to recruit Fuyuka, you have to beat Onigawara's upper taisen route with an S-rank.

In order to recruit Fuyuka, the following requirements are needed:

After this, she can be scouted for an amount of 1720 Kizuna points.

Young Form
In order to recruit Fuyuka, the following requirements are needed:

After this, she can be scouted for an amount of 1300 Kizuna points. Be aware that in order to make her appear as a scoutable option, you'll need to recruit at least five other members from Raimon.

Adult Form
In order to recruit Fuyuka, The Lagoon has to be defeated first in the story mode. Also, the following requirements are needed:

After this, she can be scouted for an amount of 2600 Kizuna points.

Young Form
In order to recruit Fuyuka, Ixal Fleet has to be defeated first in the story mode. Also, the following requirements are needed:

Adult Form
In order to recruit Fuyuka, the following requirements are needed:

Fuyuka's father and mother in one of her flashbacks. 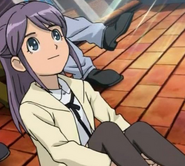 Fuyuka's casual clothing as seen in the fifth ending song.

Fuyuka and Endou when they were children in the game.

Fuyuka in the Inazuma Eleven 3 game.

Fuyuka in her formal dress.

Fuyuka as a student at Raimon.

Fuyuka stopping Shindou from going to the Holy Road Stadium.

Fuyuka in the Strikers game.

Fuyuka with Aki and Otonashi in the TCG.

Fuyuka with Natsumi and Aki in the TCG.
Add a photo to this gallery

Retrieved from "https://inazuma-eleven.fandom.com/wiki/Kudou_Fuyuka?oldid=845592"
Community content is available under CC-BY-SA unless otherwise noted.