Kudou usually wears a dark-turquoise coat with a grey shirt under it and black trousers. His hair (also sidebangs and mustache) is dark violet and his bangs cover his left eye. In Inazuma Eleven GO, he has grown a mustache and his skin is darker. In Ares no Tenbin, he is always wearing glasses and a hat.

At first, he seems mysterious, quiet, but level-headed and logical, especially when he is seen observing Raimon's soccer skills and even doubt if they can lead the team win. Later, as a coach, he is found to be mostly strict and stern when it comes to coaching, but he also cares for Fuyuka and the team, not wanting them to end up like Sakurazaki Junior High. He rarely smiles, but as the story progresses, he starts to smile more often and brighten up, not as composed as he was before. He likes to give his team orders without explaining because he knows that they will understand and figure it out themselves (which is similar to coach Hitomiko's habit).

Kudou Michiya was the coach of Inazuma Japan. At his first appearance Fuyuka called him "oto-san", though he is not the biological father of Fuyuka, but cared and looked after her since her parents' death. In episode 70, Inazuma Japan suddenly realized the strict nature of him after hearing every opinions of his, because Sakurazaki was forfeited for a fight that happened before the match against Teikoku Gakuen and Kudou resign Sakurazaki. The next practice, Fudou violently tackled Kazemaru and stole the ball from him. Despite everybody's reaction, Kudou gave him a good remark and told everyone to play like Fudou. On the third day of practice, Otonashi and Megane sneaked into the Junior High Soccer Association Headquarters to learn more about Kudou, where they were given a chance to. There they learnt that Coach Kudou was rumored to be the "Cursed Coach."

The next day, Kudou suddenly prevented them from practicing, and they will all stay in the camp hall without getting out. However, his training guided Inazuma Japan to the world championship.

In the start of the match against Korea's Fire Dragon, he tells Endou Mamoru that he fails as a captain and unneeded for the team for ignore what he said before during the match against Korea. He also made him sit on the bench even though he's the captain and the goalkeeper and he told Endou that Inazuma Japan can't won as he doubt Endou that can make the team win as Endou Ignores what Kudou said before, his decision cause Endou and many audience from Japan shock and outrage. The goalkeeper was replaced as Tachimukai Yuuki. Endou still encourages everyone and gives them thumbs up. However, Endou has finally realize why Kudou told him that he fails as captain, because Endou realized that he focus too much of his training and forgot to watch his team, and Kudou finally let Endou to play against Fire Dragon and Kudou told him to bring the team to win.

It is revealed in episode 98, that after his career of teaching soccer was suspended, he had become an elementary school teacher. Through these events, Kudou ended up adopting Fuyuka after the accident concerning her parents and becoming her foster father. He finally ended up coaching Inazuma Japan through the rest of the world series, throughout various battles until the end.

Kudou continued to be the coach for Raimon. However, when the score order (3-0, Raimon's loss) for the practice match between Raimon and Eito Gakuen was defied (3-1), he took the blame and was forced to resign from his position of coach by the current chairman of Raimon. He called Megane Kakeru after his resignation to hack into the Fifth Sector website and put the data of Endou Mamoru on it in order to make him the new coach of the Raimon Soccer club. He reappeared in episode 18 revealing the fact he is one of Resistance's members.

He later returned for the game between Inakuni Raimon and Minodouzan. He was seen in the stands watching the match. He analyzed the play and saw what the idea of Zhao Jinyun was, to get past Minodouzan's defense. He was very interested in Zhao Jinyun after the match.

In order to recruit Michiya, the following requirements are needed:

After this, he can be scouted for an amount of 2600 Kizuna points.

In order to recruit Michiya, Ixal Fleet has to be defeated first in the story mode. Also, the following requirements are needed: 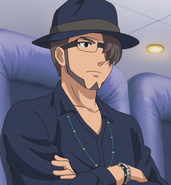 Kudou in the Inazuma Eleven 3 game.

Hibiki and Kudou watching the final in the GO game.

Kudou in the TCG.