It is used by Tsurugi Kyousuke during the match against Mannouzaka in episode 13, because it is his strong keshin hissatsu, Raimon was able to take a score and won since his hissatsu was able to break through.

At Inazuma Town's riverbed, Matsukaze Tenma, Shindou Takuto, Nishizono Shinsuke, Sorano Aoi, Yamana Akane and Seto Midori were thinking back at the opponents Raimon has faced so far during the Holy Road tournament and this hissatsu was seen in their flashback.

It was seen again in episode 35 and scored the final goal against Genei Gakuen. It successfully passed through Lucky Dice.

Lost Angel was used again in episode 37 and was stopped for the first time by Shinsuke's incomplete keshin.

It was seen again in the match against Arakumo Gakuen in the episode 38. It scored the second point for Raimon.

It is used again in the second half of the final in episode 43, against the new Seidouzan, Dragonlink. It was easily stopped by King Fire, Senguuji Yamato's keshin catch hissatsu.

After Raimon won the Holy Road, the team watched a special program that was commemorated to them on TV, showcasing their hissatsu, keshin, and tactics they used and the opponents and their moves they faced during the tournament.

First, the user calls his Keshin, mainly the user calls Kensei Lancelot, then the background shows clouds and the sky and the ball has a yellowish aura. The ball comes close to the user and as it starts glowing with a yellowish-and-black aura that is much more intense, the user positions himself and creates a large shoot against the opposing goal as the keshin thrusts its sword with a yellow and black aura. 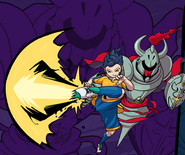 Lost Angel in a trailer of the game.

Lost Angel in the GO games.
Add a photo to this gallery

Retrieved from "https://inazuma-eleven.fandom.com/wiki/Lost_Angel?oldid=817938"
Community content is available under CC-BY-SA unless otherwise noted.