Majin The Hand (マジン・ザ・ハンド, Majin Za Hando, lit. Demon God The Hand) is a catch hissatsu technique created by Endou Mamoru's grandfather, Endou Daisuke, and it was used by Endou and Tachimukai Yuuki in the original series.

Majin The Hand was first referred to as a "Phantom Technique", as no one besides Endou Daisuke was able to master it (not even his student). After much frustration with trying to decipher the cryptic and vague instructions written in Daisuke's technique manual, Mamoru manages to obtain the technique during the Football Frontier Finals match against Zeus Junior High in episode 26 after realizing that his grandfather used his left hand for Majin The Hand, after noticing the wear and tear of Daisuke's left goalkeeper's glove, while Mamoru had been trying to do it with his right.

It is explained that the technique gets its power from the heart, which is more easily gathered in the left hand (as the heart is on the left side of the body). In order to gather the energy in his right hand, Mamoru would start off the technique by twisting his body so he would face the opposite direction. During the match against Oumihara, Endou used Majin The Hand without touching his heart.

Endou used his hissatsu with an aura (similar to Shin God Hand's aura) but failed against Baddap's Death Spear.

Shinsuke learned it against Arakumo Gakuen, in the semi finals of the Holy Road in episode 38. He easily stopped Taiyou's keshin shoot hissatsu, Sunshine Force with this hissatsu.

During the second half of the final match against Dragonlink, in episode 43, Shinsuke used it again to stop Dragonlink's Keshin shoots, though he failed two times.

It was used in episode 7 to stop Einamu's Shoot Command 06 but failed to block it.

Majin The Hand was used in the match between Raimon and Barcelona Orb, after Endou managed to see the ball movements of Clario's shots. However, it still was not enough to stop Clario's normal shot, thus conceding another goal.

Endou used Majin The Hand twice during the match between Tonegawa Tousen and Inakuni Raimon. He first used it to stop Hiura Kirina's Koori no Ya. The second time he used it was against Kozoumaru Sasuke's Fire Tornado, which was redirected at the last moment by Goujin Tetsunosuke. However, Endou was able to stop that shot by diving to the corner, saving it with Majin's left hand. Later, Kozoumaru and Goujin used the technique again, which was saved again by Majin The Hand, but the power of the shot was a lot higher than before. As Endou faced Backdraft for the first time, he switched to a new technique, even though it was incomplete. As the technique was incomplete, he let in a goal, making it 1-1.

In the first variation, the user twists their body to the side making yellow energy veil appear spinning around the user. The user puts their hand on the place of the heart as yellow energy gather in their hand. The user brings their hand up summoning a Majin (Demon God). The user then uses their hand to stop the shoot, while the Majin does the same.

In the second variation, the user puts their right arm to the side and left arm to the side as yellow energy veil gather and an orb of yellow energy gather appear spinning around the user. The orb of energy finally lands on the user's hand as they put their hand up as they summon a Majin. The user then uses their hand to stop the shoot, while the Majin does the same.

In the game, the user simply crouches down slightly then bring their body back up to summon a Majin. Then the user uses their hand to stop the shoot, while the Majin does the same.

The user summons their keshin in place of the Majin. The user then uses their hand to stop the shoot as the keshin does the same.

Majin The Hand used by Tachimukai in the anime.

Majin The Hand failing to stop a Keshin shoot.

Majin The Hand stopping Fire Tornado on an odd angle.

Majin The Hand in Daisuke's notebook. 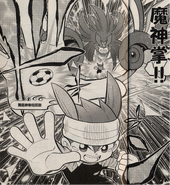 Gouseishi Titanias using Majin The Hand in the manga (Taiwanese).

Majin The Hand in the Galaxy game.

Majin The Hand in the new Ares game

Majin The Hand in the TCG (blue version).

English localization
Add a photo to this gallery

Retrieved from "https://inazuma-eleven.fandom.com/wiki/Majin_The_Hand?oldid=837132"
Community content is available under CC-BY-SA unless otherwise noted.