Chapter 01
Matsuno Kuusuke ( ), also known as Max (マックス, Makkusu), is a forward for Raimon. He was a candidate for Japan's national team, Inazuma Japan, but didn't get selected.

Max has light skin, round black eyes and is average/slightly short in height. He has shoulder-length burnt orange-red/reddish-brown hair tied into a ponytail and an orange nose similar to that of a cat, though his Ares design has a normal nose. He is often seen wearing a pink and blue cat-design cap and he wears a different cap, white with colorful flowers on cat-design, when sleeping.

He is quite blunt and overly confident, his honesty sometimes causes him to say things his teammates don't want to hear, however he generally means well. He's a fast learner, enjoying challenges and trying new things, however taking a while to warm up to them.

Matsuno excels at all sports and was involved in many other sport clubs. He joined and helped the Raimon soccer club mainly in stamina and endurance. He enters Raimon seeing one of Endou Mamoru's posters asking for players to join the club.

He and most members of Raimon are later sent to the hospital due to their injuries from the attack on Kasamino by Gemini Storm. Because of this, he became a member of the Dark Emperors in order to gain more power. They fought with Raimon, where he and Handa show their new hissatsu, Revolution V. They then begin to crush Raimon with their shots, but Endou was able to change them back to the way they originally were and make them realize what they were doing was wrong.

He was one of the 22 selected to join Inazuma Japan, being placed in Team A, which is Endou's team. They had a match so that their coach could see their skills. During the match he made a pass to Hiroto which leads his team to the first goal, however he failed to be chosen to be in the team. In the game, he was one of the players to be chosen as a member of Inazuma Japan, however, he lost. He is later shown at the graduation of the Raimon team. Both the old Raimon team and new Raimon had a match, where is shown that his skills are improved since the last match as he was able to dodge Toramaru.

After Raimon won the Football Frontier, they were congratulated by other people at school. Hibiki suggested them to have a practice match against Spain's team, Barcelona Orb, which Max also took part in. However, Raimon were completely underpowered compared to them and Max was surprised to see that none of their techniques worked. He tried to steal the ball from Bergamo Regult, but failed. In the end, Raimon lost 0-13, with everyone including him being fatigued. The president of Japan's Soccer Association told them they had to disband and transfer to other schools in order to strengthen Japan's soccer. Like the rest of his teammates, he was shocked by the news and agreed with Kabeyama's comment when the latter said that he felt stressed about the idea.

He appeared in the last episode, where the reformed Raimon team was ready to have a match with Inakuni in the Football Frontier Autumn Tournament.

The only way to recruit Max is to get S-rank in Hirai Shinzou's taisen route. He is the prize you get after beating all the teams in the upper-right group.

In order to recruit Max, the following requirements are needed:

After this, he can be scouted for an amount of 1720 Kizuna points.

In order to recruit Max, the following requirements are needed:

In order to recruit Max, Ixal Fleet has to be defeated first in the story mode. Also, the following requirements are needed: 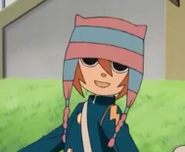 Max in his school uniform.

Endou introducing Max to the club. 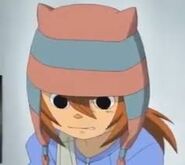 Max in the hospital.

Max in Team A. 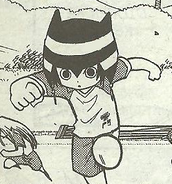 Max in the Manga.