Megane Kakeru ( ) was a forward for Raimon and later a manager for Inazuma Japan.

Megane is quite short, with fair skin, brown hair, small black eyes and blue glasses. In GO, he's taller, and has a different hairstyle.

In episode 1, he is quite arrogant and kind of mischievous, as he wanted to be known as the "hero" of the soccer club. But he is actually a kind and caring person. In some occasions, Megane even becomes strong and stand up bravely to fight against those who are cheating, as shown in episode 9. In season 2, he always became immediately terrified by something scary. But, compared to his brother, he still has stronger emotions.  He doesn't want anybody to name their hissatsus but him. As seen when Kazemaru named his hissatsu instead of him, and when Fuyuka also named Kazemaru's hissatsu, Banana Shoot.

Megane joined the team before they played against Teikoku Gakuen claiming himself to be "the hero who saves the team". But when he saw his teammates fall one after another, he ran off, abandoning the uniform. Ever since then, he's almost always on the bench, but at times he would man up and join the match but would get destroyed a few seconds after, but he was most active in episode 9 against Shuuyou Meito. Megane has a habit of calling catchy names for his teammates' techniques, for example he was the one who called Someoka's first technique "Dragon Crash".

He's one of the members who stayed with Raimon during all the fights with Aliea Gakuen. It seems that he's easy to get frightened by something scary or unexpected, and even passed out some time. For example, while Megane was sitting inside the Inazuma Caravan, a bear suddenly appeared and attack the window next to Megane, and he immediately passed out.

Megane has a twin brother - Megane Kazuto - who was more athletic (yet more emotional) than him. His brother wanted to join the Inazuma Japan but failed. After the selection, Megane is seen comforting Kazuto as he cried and clung onto him for not being selected in Inazuma Japan. This shows that his brother is mentally weak despite him having an athletic ability. He is not good in football but he can say the names for the shoots.

His prime job according to him is to name the new hissatsu invented by his team. He reads a lot of books, manga and plays video games so as to get new ideas about naming hissatsu. In this season, he became one of the managers or to him, a tactical advisor of Inazuma Japan. Megane usually records the gameplay, seeking up to opponent's database, giving explanation as well as naming hissatsu but sometimes, the managers managed to get ahead and do so before he does for the last two options. This is shown during episode 73, in which Megane shows frustration when Fuyuka named Banana Shoot for Kazemaru's technique first and episode 85 where Otonashi managed to explain the division of area in Liocott Island before Megane manages to do so.

After Inazuma Japan won the Football Frontier International, they return to Raimon and move on to graduation, along with the Megane brothers. He records and cheers everyone up in their graduation match.

He appeared in episode 5 of the Inazuma Eleven GO series. There, he was seen playing video games on his computer. While playing, he received a phone call from Coach Kudou. Kudou's orders were to hack the Fifth Sector network to install Endou Mamoru's data in order to make him as Raimon's new soccer coach after Kudou was fired.

In episode 19, he was hacking information from Fifth Sector. Someone knocked at his door and he thought that it was Fifth Sector. It turned out to be Kudou, to which he stated that he scared him.

He appeared at the end of episode 50 when Tenma and his team traveled to the moment when Raimon won the Football Frontier in order to have a friendly match with them.

In order to recruit him in the third game, you must have his brother, Megane Kazuto, in your 4 member team. He will be at the 2nd floor of the Inazuma Japan's dorms.

In order to recruit Megane, the following requirements are needed:

After this, he can be scouted for an amount of 480 Kizuna Points.

In order to recruit Megane, the following requirements are needed:

After this, he can be scouted for an amount of 100 Kizuna points.

Young form
In order to recruit Megane, Ixal Fleet has to be defeated first in the story mode. Also, the following requirements are needed:

Adult form
In order to recruit Megane, the following requirements are needed:

Megane showing off his skills.

Megane using himself to change the direction of Dragon Crash (Megane Crash).

His glasses being broken during the match against Shuuyou Meito.

Megane injured after playing for less than a minute against Zeus. 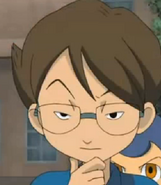 During the second season.

Megane getting angry at Tsunami about the way it could of hurt someone.

Megane with his twin brother.

Megane working/hacking to get more information from Fifth Sector.

The two brothers in the ending credits of the third game.

Megane in the TCG.

Retrieved from "https://inazuma-eleven.fandom.com/wiki/Megane_Kakeru?oldid=838519"
Community content is available under CC-BY-SA unless otherwise noted.