Min Yinqi is tall and large, and has chestnut-shaped brown hair. He has small eyes and has sometimes has faint red spirals on his cheeks for blush.

Min appeared for the first time in episode 15 in Li Hao's flashback. Li told how they met Zhao Jinyun, who offered them help and protection, at the same time teaching them soccer and honest life. When Zhao left them one day, claiming that they no longer needed him, they continued to follow the rules that he taught them and took part in the Chinese youth soccer tournament. In the tournament they reached the final where they faced the Shanghai Hoshinekodan team and drew 2-2.

When the match with Inazuma Japan began, Chinese team overwhelmed them with unusual tricks and plays. All players participated in tactic Banri no Choujou thanks which they quickly scored 2 goals. When the match resumed after Haizaki Ryouhei and Kira Hiroto failed to score, China used their another tactic which was Shourinji Kousoku Juuhachijin thanks which they created optical illusions, using their high speed. In the second half of the match Japan counterattacked. Min easily blocked Hiroto's shot The Explosion using his technique Bakugui Shishi. Later when Goujin Tetsunosuke entered the field, China again used their tactic Shourinji Kousoku Juuhachijin but this time Japan outsmarted them, thanks to Inamori Asuto’s Inabikari Dash. Goujin shot with his Fire Lemonade Rising and Min used again Bakugi Shishi. However this shot was so powerful that Min moved back and wasn't able to stop it, even with Tao Lu and Xiao Rau who supported him. Finally Japan scored the first goal.

The match resumed and China immediately used their new tactic Minna de Jiangshi, successfully blocking Japan's players moves. Min barred Ichihoshi Hikaru with Xiao and Tao. Later Li initiated another tactic Mouko Shuurai thanks which China got through the Japan's defense but this time they didn't score. Both teams kept fighting and didn't want to let it go. They wanted to support Zhao in his fight with the Orion Foundation, but at the same time they wished to win this match because they loved soccer.

In Li Hao's flashback it was seen that Min, Tan Tanmin, Li and Wu Longchi left the orphanage because there wasn't enough food for everyone. They decided to sacrifice, to save other children and Li's sister, Li Yuchen. Later they used again Minna de Jiangshi but this time Japan outsmarted them and scored the second goal, tying 2-2. When Nosaka Yuuma and Ichihoshi initiated their new tactic The General Japan got through the Chinese defense and successfully scored the third goal. China was trying to counterattack and Li along with Zhou Xing shot last time with Tenhou Chiretsu , however it was blocked. The match ended and all players fell on the field exhausted and tired, at the same time satisfied with the fair match. Everyone thanked each other for honest play and promised to play one more time in the future. Later at the stadium Zhao supported Chinese team and praised all for their play, at the end they decided to go for some noodles before returning to China. 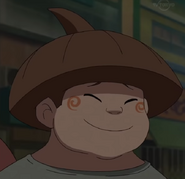 Retrieved from "https://inazuma-eleven.fandom.com/wiki/Min_Yinqi?oldid=822944"
Community content is available under CC-BY-SA unless otherwise noted.